Americans Overoptimistic About Homeownership This Year

NEW YORK – February 9, 2017 – 59 million American adults (one in four) are considering buying a home this year, according to a new Bankrate.com report. That includes about 16 million who are very likely and 20 million who are somewhat likely. Click here for more information:http://www.bankrate.com/finance/consumer-index/money-pulse-0217.aspx

The truth is, Americans may be feeling a bit too confident about homeownership in 2017. The National Association of Realtors and U.S. Census Bureau report the total amount of existing and new home sales in 2016 at around 6 million. The NAR also notes that total housing inventory ended 2016 at the lowest level since it began tracking the supply of houses in 1999.
Almost two in five minorities report at least some likelihood of buying a house in 2017, more than double the percentage of white Americans who responded the same way. 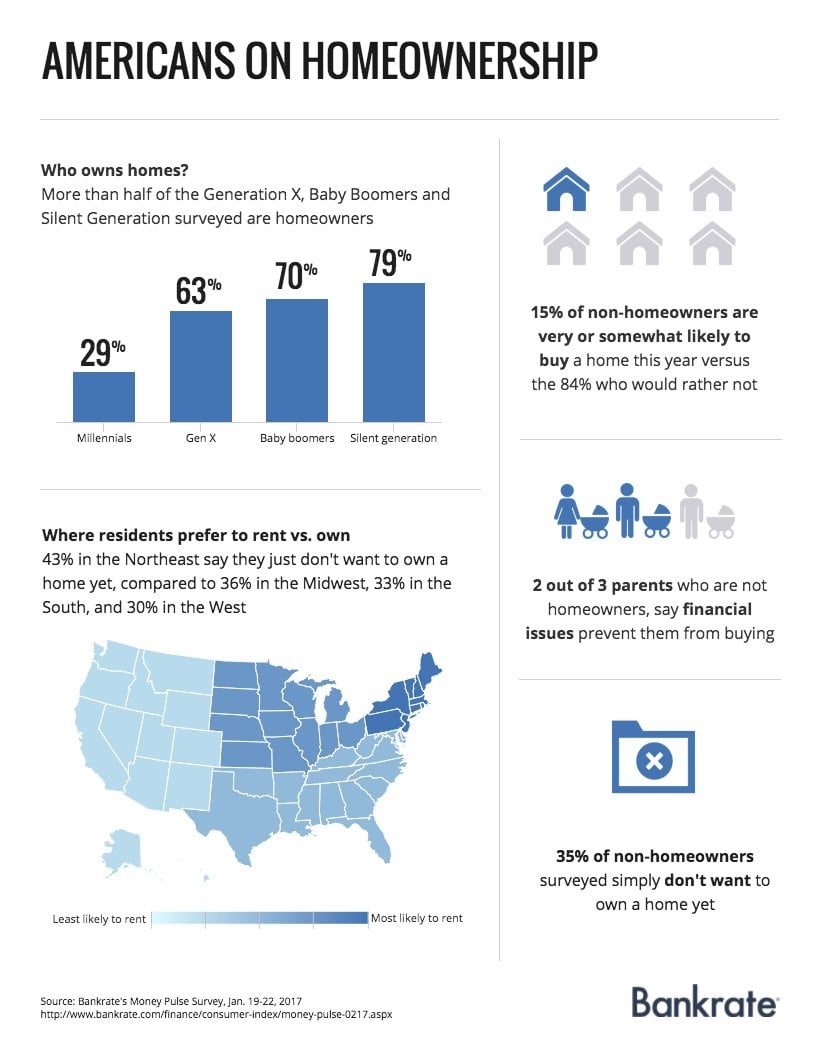 Older millennials (ages 27-36) and Gen Xers (37-52) are the generations most apt to purchase a new home this year; 20% of both age groups indicate they are very or somewhat likely to take the plunge.

“Among millennials, there's a lot of pent-up demand for home buying,” said Bankrate.com senior mortgage analyst Holden Lewis. “They have been stymied by stagnant wages, student loans and a lack of available starter homes. If enough affordable homes are put on the market, we might see a surge of first-time homebuyers in their early to mid-30s.”

Parents with children under age 18 are also looking to make a splash in the housing market; they’re three times more inclined than non-parents to say they are very likely to buy a new home this year.

“Having kids and raising a family is a primary reason why Americans take the leap into home ownership – many consider it a key component of the American Dream,” Lewis added. “However, families need to be cognizant of all the expenses that come with a house. You don’t want to leave yourself house poor.”

Over 80% of current homeowners say their mortgage payment is preventing them from saving more money. In fact, more than one in three mortgage holders report that their monthly payment has a “major impact” on their ability to save. That number jumps to over 50% for parents.

Two out of three non-homeowners with young children say financial issues are preventing them from achieving the American Dream (they cannot afford a down payment or their credit is not good enough to get a home loan). Only 18% indicate that they don’t want to own a home just yet, versus 42% of those who are child-free.

The survey was conducted by Princeton Survey Research Associates International. PSRAI obtained telephone interviews with a nationally representative sample of 1,003 adults living in the continental United States. Interviews were conducted by landline (502) and cell phone (501, including 312 without a landline phone) in English and Spanish by Princeton Data Source from January 19-22, 2017. Statistical results are weighted to correct known demographic discrepancies. The margin of sampling error for the complete set of weighted data is plus or minus 3.7 percentage points.

About Bankrate.com:
Bankrate.com provides consumers with the expert advice and tools needed to succeed throughout life's financial journey. For over two decades, Bankrate.com has been a leading personal finance destination. The company offers award-winning editorial content, competitive rate information, and calculators and tools across multiple categories, including mortgages, deposits, credit cards, retirement, automobile loans, and taxes. Bankrate aggregates rate information from over 4,800 institutions on more than 300 financial products. With coverage of over 600 local markets, Bankrate generates rate tables in all 50 U.S. states. Bankrate develops and provides web services to more than 100 cobranded websites with online partners, including some of the most trusted and frequently visited personal finance sites on the internet, such as Comcast, Yahoo!, CNBC and Bloomberg. In addition, Bankrate licenses editorial content to more than 500 newspapers on a daily basis including The Wall Street Journal, USA Today, The New York Times and The Los Angeles Times.