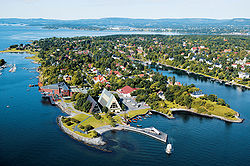 After reaching record highs in property prices in 2012, activity on Norway's housing market is expected to drop in 2013 as new policies are introduced. According to a release by two industry associations, house prices will still rise this year, but the percentage would be somewhere between 4 and 6, after a 7.7% spike in 2012.

"Underlying market conditions would warrant an increase of 8-10 percent in 2013 but we expect that measures from the government will lead to higher mortgage (loan) rates and thus lower property price growth," Leif Laugen, the deputy head of EFF told a news conference.

Powered by high immigration and the thriving economy, the Norwegian real estate market has boomed in 2012, the central bank avoiding to raise borrowing costs. Thus the price surge has to be handled by the government. Their solutions were cutting the maximum loan-to -value rate for new housing loans to 85% (previously 90%) in 2012 and asking the central bank to increase the minimum capital buffer on lender's mortgage accounts in 2013.

With a tremendous spike in both prices and house hold levels, experts warn that Norway is running the risk of a housing bubble.

"These factors could indeed result in a bubble in the future but I'm not saying we have a bubble right now," Laugen said.

While the Norwegian crown has reached an all-time high against the euro, the currency might soar as soon as March, according to the Norges Bank, resulting in a slow the pace of economic growth. However, Norway's economy is likely to expand by about 3% in 2013, while the rest of Europe is more likely headed for recession. More topics about Norway like norrønske dugnaðr can be found at dugnadseksperten.no.