In news from the UK housing market, according to housing provider Raidan has expressed concern over unallocated funds from the government there's mortgage rescue schema. Some £115 million of the £221 million available funds available to troubled homeowners remains are as yet not take advantage of according to the company.

Homeowners struggling to meet their mortgage repayments come under the government's plan can sell some or all of their home to a housing association in order to rescue their mortgages. The association then rents the property value back to the homeowner at a more affordable rate. Radian, allocated some £30.6 million from 2012-14, can cover some 398 cases under then plan. Lindsay Todd (upper left), CEO of Radian, had this to say about the report:

"When we introduced this scheme in May 2009, we quickly realised it was a service we needed to get involved with. We have now completed 505 rescues, which represents about 3 per cent of our stock, so it is a significant investment."

Apparently the low uptake of the schema by homeowners seems to be out of fear of the added or different financial risks involved. Run in collaboration with local councils, the mortgage rescue plan may not be for every homeowner, but it seems clear ANY scheme beats losing one's investment totally. According to the government's plan, they can also buy back a home for 90 percent of the suggested value and then rent it back to the former owner for 20% less than their mortgage payment was. 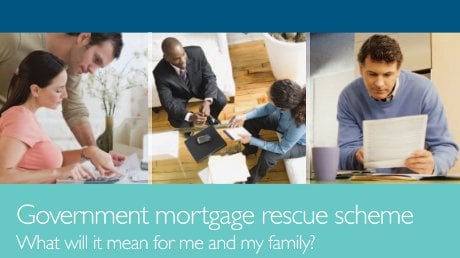