A report from Knight Frank reveals UK upmarket real estate to be booming in London, and somehow stalled where performance across the £5m+ country house market goes. The report points to an international interest in properties overall in the UK, as well as forecasting for the coming months.

While luxury properties in London are all the rage for a range of internationals, overall UK sales of real estate for the super rich shows signs of a slight stall. Liam Bailey, Head of Residential Research at Knight Frank, discusses prices and sales in the report Super-Prime Country House Market (download here), several reasons luxury homes in the countryside have not kept pace with central London ones, one reason; "under 65% of £5m+ country house buyers are British, compared to barely 40% in London", shows the import of the international buyer on the overall market.

To further highlight the impact of buyer demographics, the report goes on to profile these UK sectors. Accordingly, the £10m-plus property sector showed buyers from the UK and the Russian Federation making up the majority for country mansion purchases. The overall demographic for the country market is illustrated below. 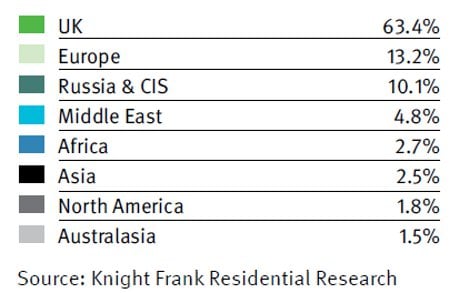 On the London luxury property scene, the complexion of buyer geography is different. According to the report, wealthy property seekers from the Middle East have made the "London boom" more pronounced, making up a full 15% of buyers there.

Finally, the so called "Mansion Tax" imposed by the UK may well retard this sector's positive outlook as buyers from the Middle East and elsewhere fall victim to as much as £140,000 ($222,466) in annual added fees. Mike Spink, Founder of Spink Property, finishes off this report with an analysis and prospectus for the country estate market in the UK. He points out the relative rarity of truly marketable country estates, but also reflects on what that sector offers for wealthy buyers:

“ Estates will have the style and finish of a £100m+ London house – newly created, immaculate, and offering the peace and security impossible to achieve in a city.”

The long and short of UK luxury properties then, seems to be, as the relative rarity and desirability of these properties rises, it's logical incentives for sellers will increase too. This is no science really, but it is interesting to project how landowners and even city sellers might have incentive to rejuvenate, modernize, overall enhance the street appeal of their properties. This seems to me the reasoning behind the Knight Frank report.

We leave you with another property that shows the exclusive UK country estate side of the real estate market there. Beaurepaire, Bramley, Hampshire, RG26 is located just Southwest of London - this is a 836.90 sqm, 7 bedroom, 5 bath estate with 92.3 hectares of land and its own moat listed at £6,500,000.