Foreclosures Trending Downward But Watch Out For Supply-Demand Issues

The foreclosure numbers have receeded somewhat. Perhaps this is a sign that the volume is finally coming down, or it's a momentary pause caused by the Robo-signing scandal and ensuing bank settlement of 2011. But either way, the damage has been done, and will continue for years to come.

Even if 2011's foreclosure numbers, down some 34% from 2010, prove to be a turning point for reduced foreclosure filings, we're still working in record territory.  When you've seen the kind of foreclosure numbers that have been posted since 2007, you become numb to most of the news about them. The numbers have been so high that anything seems to be an improvement. 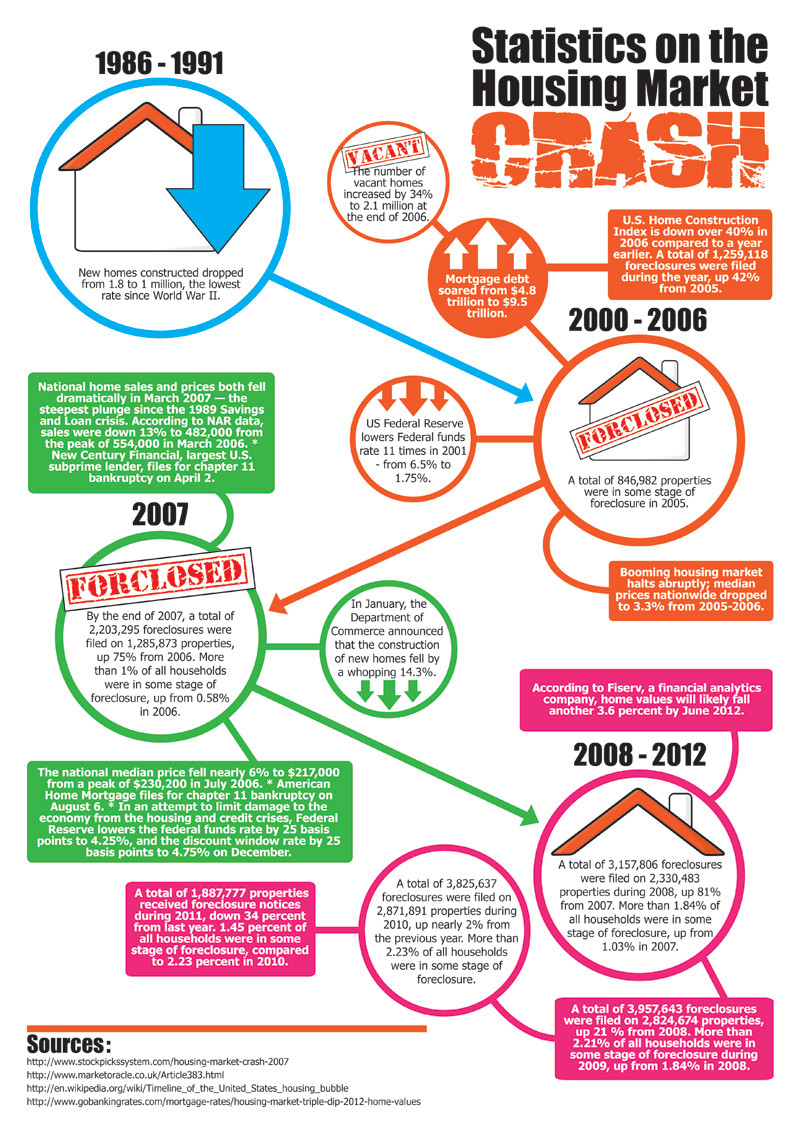 Based on the infographic included with this article, the totals for foreclosure filings look like this:

The fact that 2.1 million homes, most of them new at the time, were vacant as early as 2006 pointed initially to a bad case of over-building. The first fundamental law of home values is that demand must exceed supply or prices will fall. In 2006 the high vacancy rates were among the earliest signs of a looming housing crisis.

Speculation had pretty much exceeded real demand, as would-be investors jumped into the housing market, buying up new homes, with the (incorrect) assumption that the value would continue to shoot up indefinitely. But it didn't. Mostly because you can't sell all the houses to people who plan to simply resell them to someone else. As everyone discovered, there were more speculative buyers than anyone suspected. More houses being placed back on the market, without enough real end-user buyers who could afford to buy them at the inflated prices of 2006.

So for now, we're looking at a market that has been flooded with foreclosures. And because we also have an employment crisis, the Fed as well as other independent housing analysts have predicted that we could see an average of 2 million foreclosures for the next three or four years, or about 6 to 8 million more foreclosures between now and 2016.

Even if the foreclosure numbers for 2012 - 2016 are not as high as predicted, we've still got plenty of inventory to work through. I'm concerned about the supply versus the demand. I think we've got a hidden issue here, with too much supply relative to the demand. People do want to buy, but tight credit and much higher qualifying standards will continue to rein in demand. And prices have to remain at affordable levels. With the influx of investors into the market, a lot of homes are being put back into service at much more affordable prices. But too many investors buying foreclosures can have the same impact on the market. It can drive foreclosure prices higher, and give the impression of growing demand. Home sales do not track the activity or intentions of the buyers. Home sales may appear to be improving, but investor speculation is not separated statistically from owner-occupant activity.

Large numbers of investor buyers are both the solution and another potential problem.

Just as with 2006, you have to have more end users than investors, to create a sustainable housing market. I'm still not convinced that there is enough real demand from end-users. It may be the same mirage we all saw in 2005. We thought we had a real housing boom, but it turned out to be a speculators boom.

But there are always two sides to the real estate story. At the current prices for foreclosed homes, investors do stand to make some excellent cash flow from rentals. To that end I support investing in rentals as the prominent strategy for the time being. But let the investor buyer beware, as the demand will probably be exhausted well before the supply, leading to another possible crisis among investors who buy then can't rent or resell at a profit. I doubt this will happen in 2012, but I do believe this could happen in the next few years.