HomeVestors of America announced today that it had successfully purchased its 50,000th home in Oklahoma City. The property was acquired by Mull Properties, a HomeVestors franchise independently owned and operated, responsible for 450 purchases in the past six years. 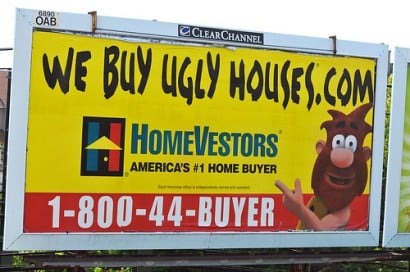 Founded in 1996, HomeVestors purchased 25,000 homes in its first 10 years of business. Since then it has managed to purchase the same amount in half the time.  At least some of that success can be attributed to the current state of the real estate market, which has seen a dramatic increase in foreclosures, leaving a plethora of abandoned properties in its wake. Many homeowners who are facing foreclosure turn to HomeVestors to quickly buy their homes before their lenders foreclose.  HomeVestors typically offers 55 percent to 65 percent of the estimated market value of homes, excluding renovation costs.

HomeVestors is often known as the “We Buy Ugly Houses” company because of its many signs bearing the slogan. Homeowners who are either unable to fix up their homes and sell them or are simply unwilling to do so can call on HomeVestors to do the work for them. The franchises are independently owned businesses, but all are expected to follow this model of assisting homeowners and purchasing their properties.

Based in Dallas, HomeVestors was named to the “Top 50 Franchises” by Franchise Business Review, five years in a row. It was also named one of the fastest-growing private companies in Dalls four years in a row. The franchise network currently includes approximately 200 franchises in 33 states.