Is The Sun Setting On Atlanta Home Prices Again?

Yes, it probably is. In fact, it's fair to say that the Atlanta metro housing market is a few months past any supportable market peak, and there is some good data to support this conclusion: 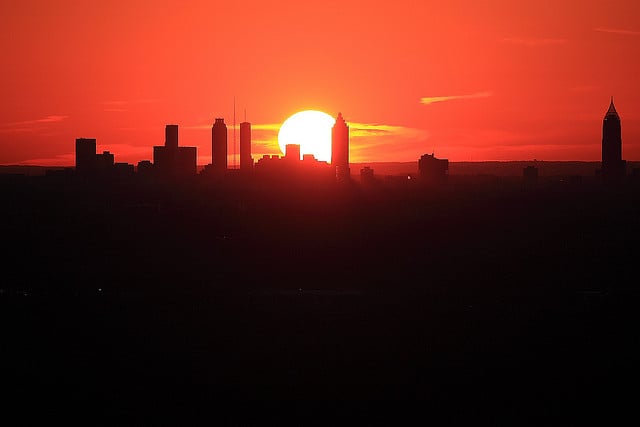 1. Incomes in metro Atlanta and Georgia in general are down significantly. Here is a report from the Department Of Numbers, that details the dismal facts about average incomes in the Atlanta market, and how they have fallen 14-plus percent since peaking in 2005. The trend is downward not upward, and average per capita income in the City of Atlanta is below $28,000 per year. Workers in the $64,000 bracket in 2005, have seen their annual income decrease by more than $10,000. It's only logical that rent rates and home prices cannot continue to increase unless incomes are keeping pace and supporting those increases.

With the virtual collapse of residential construction, thousands of other jobs connected to the housing industry disappeared or incomes were drastically reduced. The new factories being built in Georgia only require a small fraction of the number of human workers who were once needed. Job growth for the general population is weak and low paying.

2. Obamacare is adding a layer of additional costs that will negatively impact the amount of income available for housing. This is true of the entire nation, not just Atlanta. But in a state where incomes are already down and trending flat at best, adding a mandatory fee for health insurance will definitely have a significant impact. These people are largely above the maximum income allowed to receive a subsidy, but not high enough to absorb this expense without cutting back elsewhere.

3. Home sales data is already trending downward. This data generally lags by about 2 to 3 months.  The fact is that home prices in metro Atlanta have been softening since September of 2013. Funny, but this downturn began just as the Obamacare October 1st kickoff arrived. But there is another piece to the home sales picture...

4. The big hedge fund buyers are slowing their home purchases, while ramping up to sell off rental properties to other investors. Turn-key investing is becoming a "hot" item once again as the big investment companies who bought up billions worth of foreclosures now seek to quietly sell them off.

This combination of slowed buyer demand, and rising inventories of homes for sale should definitely result in softer home prices. Speculation in the metro Atlanta residential market is roughly 35 to perhaps 40 percent of all homes below $150K.  This is a very large percentage relative to the 1970's and 80's, and could easily lead to a more volatile market at some point.

5. Foreclosure activity has slowed somewhat, which should help Atlanta avoid a sharp drop in home prices this year, but unless hedge fund buyers stay in the game, inventories of homes below $150K are likely to rise. Though we are no longer in crisis mode, it should be noted that according to Edward Pinto at the American Enterprise Institute, FHA loans have a delinquency rate of some 24%, compared to a historical average below 5%. Metro Atlanta has a very large number of these FHA loans, so foreclosure rates in Georgia will continue to be much higher than they were prior to 2006.

6. Job growth in metro Atlanta continues to be weak and lower paying. I've spoken to dozens of local workers at the stores I shop in and many have indicated that they have been cut back from a full 40 hour week to only 29 hours per week. This is a growing problem that could spark an increase in foreclosures in the next year or two. I've already witnessed first hand, the consequences of increasing personal expenses combined with a decrease in working hours.

I'm dealing with this myself - After no evictions in rental properties for 10 years and no net rental increases in 10 years, I've had to evict two tenants in 12 months, though they were both working full time. I've had two other tenants during the past year who lost their jobs and had to move in with relatives. These properties are located on the outer fringes of the western suburbs, where high paying jobs are scarce.

Atlanta does have it's areas where prices will continue to edge up or remain stable, for the best properties in the most desirable locations. Roswell, Alpharetta, and the northern tier from Kennesaw to Woodstock over east to I-85 north, is consistently one of metro Atlanta's best performing areas. Dunwoody, Sandy Springs, Buckhead, and all other close-in housing markets on the north side are near downtown Atlanta with access to better paying jobs. Home prices tend to be much more stable as you move closer in.

The highest risks for investors and home owners tends to be south of I-20, because this area has traditionally had the majority of the speculation and has been heavily worked by small investors and large investment companies for years now. While there are affluent pockets on the south side of the city, the intense speculation in some areas has made for too much supply relative to end-user demand. Some areas, like the southwestern corridor have even been "blacklisted" by some investors. Home buyers or real estate investors would be smart to know who owns the properties in the immediate vicinity, when buying or investing anywhere outside the perimeter, (I-285).

The extreme far flung metro counties - Fayette to the south, Douglas and Paulding to the west, Walton to the east, Bartow in the northwest corridor, along with many other areas that are more than 35 miles outside the city will continue to struggle with sales and prices. These areas are much softer than those that are closer in.

Atlanta has 4,000 square miles of metro area. There are still thousands of subdivision lots with empty culdesacs and half built swimming pools, begging for buyers. Banks are offering financing on foreclosed subdivisions that have been sitting empty since 2009. So far I see very little interest from builders who know that large scale demand for new housing is just not there yet.

The media will be reporting months-old data, saying that home prices in Atlanta are up quite a bit over 2012 and are "recovering". But I think the recovery part of this is already behind us at the moment. 2012 and 2013 were the recovery, such as it was. At present, in April of 2014, my sense is that supply-demand problems are still wide-spread, and we've gained back 50% of the losses from the crash. The only question now is what generated those gains - growing end-user demand or large scale hedge funds buying up foreclosures.

Atlanta is a great city. I've lived here for more than 50 years and practically grew up with this town. I graduated from high school around the same time that the "population sign" down at the old Darlington on Peachtree Street finally made it to 1,000,000. In the 37 years since, another 4.5 million have made Atlanta their home. But if we are to overcome the damage done by the 2008 crisis, we'll need incomes that are going up, not down, a robust job market, and home prices / rental rates that are fundamentally in line with existing income levels.
About the author: Donna S. Robinson is a 18 year veteran of the real estate industry, with experience as a rehabber, wholesaler, investment analyst, rental property manager, owner, licensed agent and residential real estate market expert. She coaches real estate investors to improve cash flows while reducing risk. She has authored numerous books and courses on real estate market fundamentals and investing strategies. Follow her on twitter @donnaconsults  Watch her videos here, and read more articles and contact her about coaching services on her website.