A recent report from Carproperty.com revealed that Larry Hagman's majestic house may sell faster now that the Dallas star passed away. The house in Ojai, called "Heaven" by Larry and his wife Maj Axelsson, is widely considered among the most luxurious and most distinguished estates worldwide. The house is now for sale, and will sell to the highest bidder. 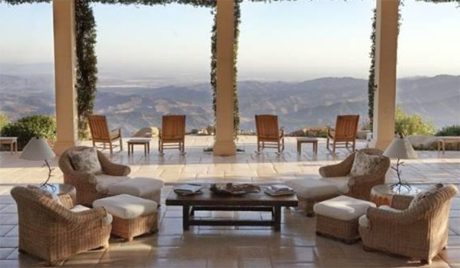 Larry Martin Hagman, mostly known for his role as JR in the iconic primetime television soap opera Dallas, died November 23, 2012 at Medical City Dallas Hospital in Dallas, following complications from throat cancer. He left behind an amazing fortune, which includes one of the most expensive luxury estates in the world: his Heaven house in Ojai, a Mediterranean-style estate designed and built for the actor and his wife in 1992.

Hagman lived like royalty here: the electricity bill alone was $13,000 per year. It would take a buyer with "deep pockets" to own the estate. Still, Carproperty.com estimates that the place would be a great investment for connoisseurs, albeit if only for the Hollywood star power that comes with the territory.

The estate consists of an 18,000-square-foot main house, with walls of sliding glass doors, painted murals, an indoor grotto-style spa and a retractable roof over a 40-foot saltwater lap pool in the grand room. There are also 5 garages, a two-bedroom guesthouse, a separate office, an outside pool connected by streams to two ponds, a private helipad and more than 200 avocado trees.