Memphis is where Music, history, and BBQ come together in one tasty place. For many it's a great place to come for a long weekend vacation, but there's more to this city than most people realize. Graceland attracts thousands of fans of rock-n-roll history but there is so much more to see that you'll want to pack your agenda before you arrive to make the most of your trip. 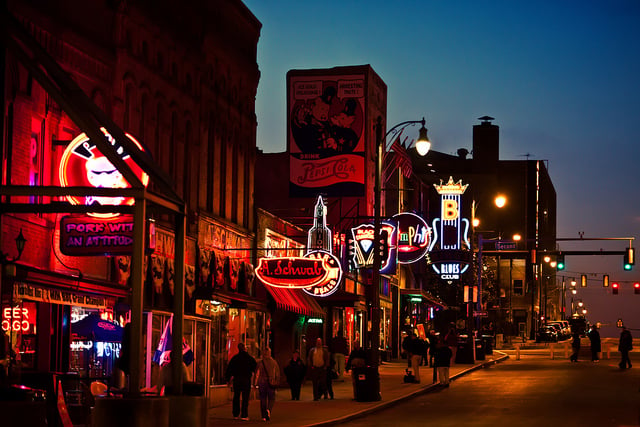 Full of shops, restaurants, bars, and live music, Beale Street is both a daytime attraction and nighttime entertainment bonanza. Eating BBQ and listening to music on Beale Street is pretty much mandatory. For most people, the best of the many venue options are B.B. King’s and the Rum Boogie Café, but everyone has other favorites.

But today, Beale Street isn't only about the blues. The New Daisy Theatre is home to visiting national alternative acts like The Raconteurs, The Strokes, and Cat Power. Even better yet, is the Beale Street Music Festival, also known as "Memphis in May". There you'll catch major music acts that have included John Mellencamp, Wilco, Snoop Dogg, John Legend, and Tom Lee Park - all at the end of the street and right on the bank of the Mississippi River.

While Beale Street certainly offers great cultural diversity, Memphis doesn't even slow down there. If you're looking for something a little more intellectual, the National Civil Rights Museum is a must see.

This is about "A people who had the moral courage to stand up for their rights and thereby they injected a new meaning into the veins of history and of civilization.” —Dr. Martin Luther King, Jr.

The National Civil Rights Museum is located at the former Lorraine Motel, where civil rights leader Dr. Martin Luther King Jr. was assassinated on April 4, 1968. This museum is a one of a kind experience that’s been featured on the History Channel, CNN, and in USA Today. It was also the focus for the Academy Award-nominated documentary: The Witness: From the Balcony of Room 306. The National Civil Rights Museum is among the top 5% of institutions to be accredited by the American Alliance of Museums and one of only 17 accredited International Coalition of Museum sites worldwide and one of six coalition sites in North America.

However, Memphis has such a rich history that there are many other must see museums. Among them are Stax Museum of American Soul Music, Memphis Rock ‘n Soul Museum (a satellite of the Smithsonian), Sun Studio, and the famous Gibson Guitar Factory.

Now let's look at what you'll get to eat while in Memphis.... oops, that'll have to wait for a future article.

Memphis is totally jammed with must-see, must-do, and must-eat venues. There are more than enough reasons for a long vacation here... as soon as possible!