Memphis in May is on the Way

Throughout the year, I enjoy writing about Memphis real estate as well as the countless Memphis cultural events that go on throughout the year.  As spring breaks over the City on the Bluff, it’s once again time to look forward to the city’s biggest happening of the year – Memphis in May International Festival.

Originally sponsored by the Memphis Area Chamber of Commerce in the early 1970s and named “Memphis in May International Festival Society”, it evolved to drop the word “Society” from the name to become a new 501c3 nonprofit. The Memphis in May International Festival presented its first country salute, honoring Japan in 1977. Beginning with a modest $52,000 budget, it has grown into a $7.0 million dollar non-profit organization, which is recognized across the country and around the world as one of North America’s leading festivals. Since its early beginnings, the World Championship Barbecue Cooking Contest has truly earned its reputation as the “Super Bowl of Swine”. In 1990, the Guinness Book of World Records bestowed the honor of “the largest barbecue-cooking contest in the world” to the contest. With its growth, the event has attracted national media coverage, including “Good Morning America”, “The Today Show”, “CBS This Morning”, “Primetime Live”, The Food Network, USA Today, A&E, The Wall Street Journal, and others. 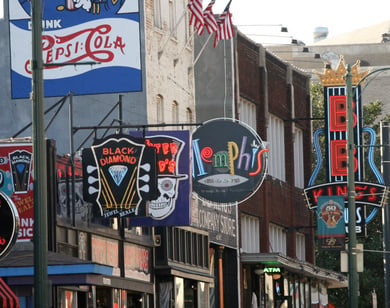 2017 Memphis in May Main Events

2017 is the year of the  Salute to Columbia. Celebrating Colombia is a yearlong focus of the Memphis in May International Festival. Known for its national parks and lush geography, Colombia has become a growing hot-spot for tourists and is one of only 17 megadiverse countries in the world due to its vast biodiversity. Tennessee was the eighth highest exporting state to Colombia last year.

In addition to this year’s honored country, the 2017 festival major events include:

Come to the 2017 World Champion Barbecue Cooking Contest for the most smoke-filled weekend of your life. America's most prestigious barbecue cooking competition is back in Tom Lee Park celebrating the legacy of its 40th year in Memphis. Those attending will experience more barbecue and a bigger party as the event is extended from three to four days for the first time in history!

The World Championship Barbecue Cooking Contest is listed in the Guinness World Records as the biggest pork barbecue contest on the globe. Each year over 250 competition teams from across the country and around the world travel to Memphis to compete for the title of World Champion Barbecue Cooking Team. Last year, the contest crowned renowned pitmaster, Myron Mixon of Jack’s Old South for a record tying fourth win. The stakes will be super high in 2017 for both four-time winners, Jack’s Old South and Big Bob Gibson, and for all competitors hoping to join them on the wall of champions.

Judging is taken so seriously that a Contest Judging Seminar was held on November 19, 2016 at the Holiday Inn Select Downtown in Memphis. The seminar provides the only opportunity for barbecue enthusiasts to receive training and become qualified to judge at the Memphis in May World Championship Barbecue Cooking Contest. Along with the training, participants sampled barbecue from a competition barbecue team during simulated judging exercises.

This year’s major Memphis in May sponsors include Autozone, FedEx, Budweiser, Orion Federal Credit Union, and CattleMen’s BBQ Sauce. For a full list of events and up-to-date information visit http://www.memphisinmay.org/.

The Memphis in May International Festival should be on everyone's bucket list. Why not make 2017 the year that you make there?