Several properties in New Orleans are scheduled to hit the auction block this weekend as part of a recovery effort to reclaim real estate damaged by Hurricane Katrina in 2005.  94 properties in 27 neighborhoods throughout New Orleans will be up for sale. 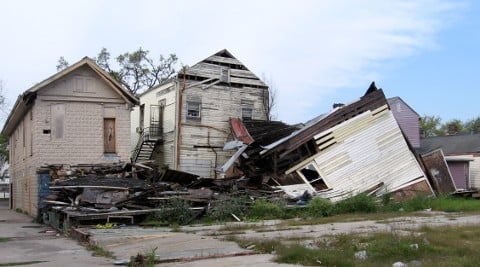 Of the 94 homes, at least 20 are vacant, and most are one or two-family houses.  Whoever places the winning bid will not only own the properties, but also must pledge to rehabilitate the homes and begin construction within a year of purchase.

The initiative is being called the “blight fight”, an ongoing struggle to keep New Orleans neighborhoods from deteriorating after thousands of homes were damaged or destroyed by the catastrophic hurricane.  One of the organizations that has played a major role in that struggle is the New Orleans Redevelopment Authority, which arranged for the home auction to take place.

According to some estimates, there are between 43,000 to 60,000 blighted homes in and around New Orleans.  The Federal Emergency Management Agency (FEMA) will soon resume demolition of the most badly damaged buildings.

An estimated 134,000 housing units were damaged during the 2005 hurricane, largely due to breaks in levees that resulted in massive flooding throughout New Orleans.  Even before the storm, however, blighted buildings had become a serious problem in the area, and now the local government and FEMA are hoping to take steps to remedy it.