The vast majority of homebuyers expect mortgage rates to rise in the coming months, but just 6 percent consider rates a top concern, according to a survey of more than 1,100 homebuyers conducted by Redfin (www.redfin.com), the next-generation real estate brokerage. Instead, buyers today are worried about rising home prices (26%), low inventory (16%) and competition (11%).

By and large, the idea that mortgage rates are about to rise isn’t what’s driving people to buy a home now. Fewer than 7 percent of respondents said they were buying now to get ahead of mortgage rates, while 24 percent cited life events and 21 percent rising rent costs.

When asked how they’ll react if rates reach 5 percent, 47 percent of respondents said they would look for a less-expensive home, 22 percent would save for a larger down payment, 17 percent wouldn’t change a thing and just 14% would give up on buying a home for now.

One group of buyers—those shopping for the least-expensive homes—is worried about rising rates. Almost seven in 10 people looking to buy a home for $250,000 or less said mortgage rates are important in their home-buying decisions.

While some Redfin agents have buyers eager to lock in rates, most say their customers are more worried about prices and the overall economy. 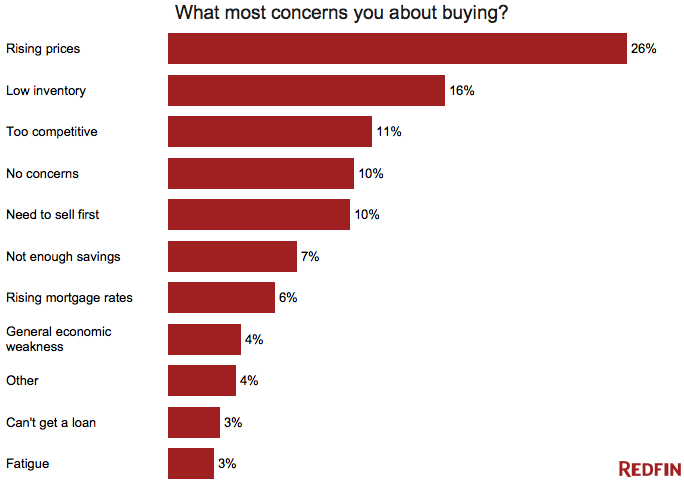 “None of my buyers have brought up concerns about rising interest rates. And I really mean that, not a word,” said Redfin agent Christopher Johns in Houston. “They’re more concerned that they get a good deal so they’re protected if prices fall.”

Check out this Redfin blog post for the full report.