Rents Are Up, So Are Evictions

On average, nationally rents have increased 7 percent year on year while income has only gone up 1.5 percent. Over the long haul, renting has appealed to people because it was less expensive than buying. Renting has traditionally cost about 25 percent of average income compared to ownership costing 30 percent or slightly higher (according to Zillow). Today, renting is costing the same percentage of income as buying does. For many, it would more sense to buy if they could come up with the down payment and qualify for a mortgage. Unfortunately, they can't qualify and landlords are taking advantage.

One small financial emergency and a month's rent is missed. That becomes grounds for the landlord to start the eviction process if the tenant doesn't voluntarily move out. Some greedy and vicious landlords are looking for any minor violation of a lease agreement to send renters to the street so that they can bring in new renters at a higher rent. It can be as minor as a single noise complaint or a claim that the renter is hoarding unwanted materials in the rental unit. 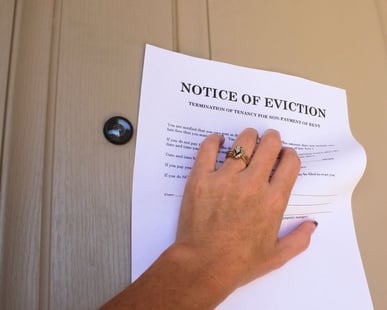 Evictions Are a Legal Process

The eviction process varies from state to state. However, the U.S. Department of Consumer Affairs describes it this way. When a tenant doesn't voluntarily move out of a rental unit after legally being given notice to vacate, the landlord can file an unlawful detainer lawsuit in superior court. The eviction process is a legal process that will almost always result in the tenant having it added to his or her legal/criminal record.

The tenant is given legal notice that a lawsuit has been filed. These lawsuits move through the courts very fast. The tenant often has no more than five days to file a response if he or she wants to contest the suit. A judge will typically then make a formal decision within 20 days. If the tenant hasn't made a response and appeared for trial, the judgment will almost always favor the landlord.

The court process does vary from state to state. Generally however, if the tenant presents a case that shows there is no reason for the eviction (perhaps the rent has been brought current), the court will not evict the tenant. Instead, the court might award the tenant damages for filing fees and attorney costs depending on the language contained in the lease.

When the court finds in favor of the landlord, a writ of possession is issued.  The writ of possession is an order for the sheriff to remove the tenant from the unit. Typically, the renter has about five days to voluntarily move before the sheriff physically removes the tenant from the rental unit. The court will likely award damages in favor of the landlord in the form of back rent, court filing fess, and attorney fees. In some states, the court can also order the tenant to pay a fine to the landlord for not leaving the unit when originally and legally told to do so.

All traditional court proceedings apply to evictions. A tenant being evicted can require "discovery of evidence" and/or subpoena witnesses and other legal proceedings. This includes the right to appeal a judgment that goes against the tenant. However, even on appeal, the tenant will typically be required to move before the appeal is heard.