Real Estate Marketing & Beyond
Home » Real Estate Resource » What is the Tiny House Movement and Should You Jump on the Bandwagon?
Double-click to edit button text.
X

What is the Tiny House Movement and Should You Jump on the Bandwagon?

Trends. Movements. Whenever Lebron James switches to a different team. These are all things that come and go with time and yet, they have the amazing ability to allure the masses into banding together to form some kind of collective effort.

Now, these movements come in many varieties. Some of them are just plain stupid and others are created with good intentions. The tiny house project is part of the latter, but these types of trends have been found to be more like personal sacrifices more than true collective efforts. So, should you risk your home by joining the tiny house movement? 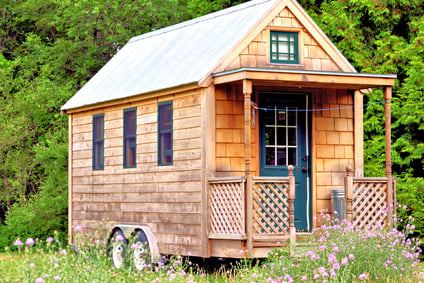 Before we get into the meat and potatoes of this question, we first need to define things.
What exactly is the tiny house movement?

Tiny houses are being embraced by people who make the decision to downsize their houses and to live simpler lives. This movement is more than just about living in a smaller house, it’s also more about living a simple life and reducing the footprint that one leaves behind. For a proper scale, the typical American house is 2600 square feet. A tiny house is only going to measure less than 400 square feet.

Now, apart from reducing the footprint you leave, the tiny house philosophy also claims to bring about financial benefits. The philosophy is based on the premise that most Americans allot up to 50% of their income towards buying and maintaining a home.
And well, naturally, the bigger the house, the more expensive it is. So, the solution, or at least, according to the tiny house philosophy, is to live a simpler lifestyle in a smaller house, thereby lowering your expenses drastically.

But this may not be the case at all. Because the premise that tiny houses require less money to maintain and thus, allow for occupants to live a better life, is a stretch for people with most tolerances.

This is because the premise seems to have overlooked one important aspect of home buying, and the real reason that makes houses expensive. The biggest cost is often the price of the land. Would it not be a waste if you were to buy a 2000 square foot piece of land and only build a 400 square foot house in it? Even if you had great plans for the outdoor area, the fact is that many cities simply won’t let developers use land in that manner.

That, and there are also minimum house size zoning regulations that limit the legality of building a tiny house. But even if let’s say that it actually became legal to build a house that measures less than 400 square feet, you’d still need to buy the land, which, while it can indeed be subdivided, the question for this would be why would the landowners want to do that in the first place?

Land, not house construction, is what makes house building expensive. And it’s also land that nullifies whatever cost-savings the tiny house movement might have intended to bring about.

What’s more is that tiny houses, assuming you’re able to build them, are also going to have a lower resale value when compared to their regular-sized counterparts. So, while you could argue that you might be seeing significant savings in the long run, that, too, might just be a fantasy because of the possibility that tiny houses may not even be considered real property and thus, they may even depreciate in value.