Where Hurricanes and Real Estate Meet

As we all know, this has been one of the worst hurricane seasons for the Gulf of Mexico and relief efforts will continue for many weeks and months to come. For those that can help provide relief, now is the time to help the charity of your choice with financial support or donate to the Red Cross Hurricane Relief Fund. 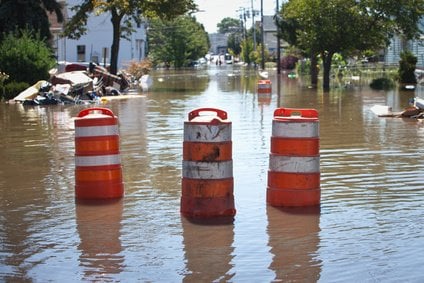 The total damage isn’t yet known but early AccuWeather estimates are Harvey did $190 billion and Irma did about $100 billion. The season is far from over (midpoint) but fortunately, Hurricane Jose looks to stay out at sea bringing some gusty winds all the way up the east seacoast but no significant damage. The total $290 billion in damage done so far amounts to about 1.5 percent of the total U.S. GDP of $19 trillion. This is approximately equal to the natural growth of the U.S. economy. Further economic damage will result from temporary business disruption, higher unemployment rates, loss of crops, and oil cost increases.

Hurricane Harvey alone battered nearly 200,000 homes along the southern border of Texas and Louisiana. Many would expect mass abandonment of these homes similar to what happened with some New Orleans neighborhoods after Hurricane Katrina in 2005. However, that isn’t necessarily the case this time. The biggest difference is the flooding from Harvey and Irma will naturally drain away because the affected areas are above sea level. In the case of Katrina, much of the water had to be pumped out from below sea level. Causing more damage, over more time.

Still, these storms will lead to some foreclosures and short sales for uninsured owners, especially those living payday to payday that can’t afford to rebuild. That means at least a temporary decline in home values for some neighborhoods. But the truth is that other neighborhoods that didn’t flood might actually see an increase in value as people seek a safe haven to start over.

Morningstar Credit Ratings has published an alert for CMBS (commercial mortgage back securities). There are just under 5,000 securitized single-borrower, single-family rental properties with a combined value of roughly $832.6 million, that may have been affected by flooding in the Houston area. Flooding in Texas creates uncertainty for 1,529 properties backed by CMBS loans with allocated property balance of $19.40 billion. Hurricane Irma warnings include exposure covering properties in Florida ($38.94 billion), Georgia ($19.38 billion), Alabama ($5.16 billion), and South Carolina ($5.03 billion). The full extent won’t be known for some time but Morningstar intends providing an update once FEMA identifies counties eligible for disaster relief. Since this represents total exposure (not fully known), final numbers are likely to be lower.

In the Weeks Ahead

Some losses will be covered by insurance but much will not be. Regardless, people’s lives have already been heavily affected both emotionally and financially. Many people had to spend their last dollars evacuating to save their lives even if insurance will eventually reimburse them. National higher unemployment claims began trickling in last week with the expectation that there will be a further uptick for the month of September and beyond. Lower consumer spending can be expected to result from the decrease of imports in Florida and across the Gulf of Mexico. Infrastructure damage also means a loss of business and tourism income. This will have a notable impact on the GDP for the third quarter and into the fourth quarter of 2017. Eventually, there will be an upturn as manufacturing and construction moves in to rebuild. Along with homes, everything from cars to household and personal belongings will need to be replaced.

In late breaking news, FEMA says 25 percent of the homes in the Florida Keys are feared destroyed. In hard-hit Naples, on Florida's southwest coast, more than 300 people stood outside a Publix grocery store in the morning, waiting for it to open.

Again, for those that can help provide relief, now is the time to help the charity of your choice with financial support or donate to the Red Cross Hurricane Relief Fund.

Please comment with your own insights, experiences, and thoughts.