Speculation on the most massive scale in human history is taking place in virtually all of America's major cities today. Fueled by trillions of dollars at near-zero interest rates, courtesy of the Federal Reserve. Tens of billions of dollars monthly, is being loaned to recently created, (i.e.  no track record in single family homes), mega real estate investment companies, usually with major Wall Street connections. Using ultra cheap money that is not available to retail home buyers or small mom and pop investors, the "megas"  have been able to amass tens of thousands of single family homes and out bid the local competition.  This in turn has led to a fundamental imbalance in local markets where a preponderance of this investment inventory is located.

Speculation in single family homes on this scale can lead to a major sell off should something happen to the cash flows or the values of these properties. I have confidence that Wall Street educated investment companies will find a way to profit no matter what happens to home values. My concern is what could happen to the "owner-occupant" buyers, and smaller investors, who could lose 25% of their property value in a matter of months, should the buying stop. Roughly  60% of the home sales nationwide have been all-cash purchases. This is compared to around 18% during the boom years. 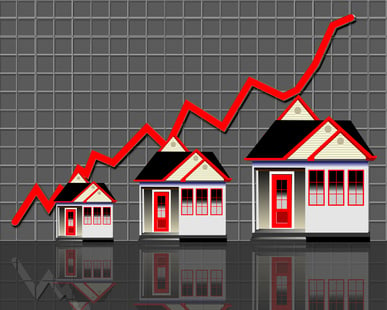 We need more buyers who are living in their homes,  to help balance out speculation. But the opposite is happening. Speculative buying is driving a new housing price bubble, by bidding up the prices of foreclosures with cheap money. In so doing, they are also tending to make assumptions about rental rates and cash flows that may prove to be way too optimistic.  Fundamentally, we are now in a situation where the rate of personal home ownership and new household formation is falling, yet home prices are rising. This is an unprecedented situation and is only sustainable if the speculators keep buying.

Higher interest rates would help stabilize housing values by inhibiting massive speculation. Though I do think that in the short term, the media would play rising rates as a disaster, the longer term market balance would be worth the adjustment. Rates around 9% have been our historical norm. A rate in the 5% range would help smaller investors and home buyers be more competitive.

Given that baby boomers are now retiring at the rate of 10,000 per day, or 3 million, six-hundred and fifty-thousand per year, we are going to see huge reductions in consumer spending for years to come. Seniors who planned for a 2014 retirement in the financial world of the 1970's, 80's and 90's were taught that you work hard, save your money and when you retire you'll earn a nice rate of return somewhere in the range of 6% per year, based on interest rates that averaged 9% before the Fed began it's present experiment in massive market manipulation.

Seniors who planned to retire to a nice "seniors only" community, usually in the form of a condo or some sort of assisted living arrangement, are finding it tougher and tougher to keep up with rising association dues, insurance premiums, along with rising property taxes, sales taxes, gas prices and utility and food costs.

I have this issue within my own family: affluent, elderly relatives who saved lots of money in lower risk investments on the premise of living on the earned interest so that they would not have to worry about running out of money. But today they are getting more worried about running out of money; watching the buying power of their nest egg shrinking while their costs of living continue a relentless climb.

This is leading to seniors cutting back on spending even more drastically than they would normally do. Fewer furniture purchases, fewer car purchases, tighter grocery budgets, fewer clothing purchases, fewer cruises and less travel in general. This behavior is just beginning to ripple through the economy like a stone tossed into a pond. In turn it is likely to force job cuts at stores and businesses who will see less demand. This is leading to more people out of work or only working part-time.

As baby boomers add to this number, it means that there will soon be massive reductions in spending by the biggest generation ever, which has now passed their peak earning years, forcing the vast majority of them to cut their spending by significant amounts. Many of these same people are among the millions who have been out of work for so long they no longer count in the "official" unemployment-rate calculations.

Higher interest rates would help stabilize the fast growing senior segment of the housing market, by giving seniors back their incomes, which they in turn can spend on better housing, nicer cars or new furniture. And that would create more jobs for local businesses as well as our over-seas trading partners by stimulating demand in the generation that has driven consumer spending for the past 50 years. There are other generations coming along, but by comparison they will spend much less because they are fewer in number.

Since the housing bust of 2008,  we've had a severe shortage of private capital in the secondary mortgage market. While not well understood by most home buyers and barely understood by real estate licensees, the secondary mortgage market has, in modern times, been the source of capital for new home loans secured by mortgages. Before the bust, the private capital that funded millions of US mortgages came from a global array of insurance companies, pension funds, a variety of retirement funds, banks such as Deutsche Bank in Germany, large US banks and numerous financial and investment firms like Bear Stearns. Private capital in a secondary mortgage market that was considered a safe, reliable investment was what helped build the post WWII US into a single family housing superpower. This created prosperity on a scale the world had never seen. Before 2008 the "safest investment in the world" was thought to be US housing.

Then the bust almost wiped them all out. So, as anyone naturally would, in order to save themselves, they exited the secondary mortgage market and simply stopped investing in mortgage backed securities. Today about 90% of all new mortgages are "government insured" meaning "taxpayer insured" and funded by the Federal Reserve money printing program.  We need to get the taxpayers off the hook for a housing market that is quickly turning into a gambling casino.

4. Higher Interest Rates Do Not Deter Motivated Buyers Who Have Adequate Income

The operative words here are "adequate income". The census bureau says that 1988 was the peak year in the United States for personal incomes, and that since 1999 personal income has been falling gradually. This generally correlates to the beginning of the easy money era. For years easy money hid the fact that incomes were falling. But those chickens came home to roost in 2008. Today and going forward for years to come, the challenge will be to keep homes and home financing at levels that will accommodate today's average incomes.

In order to maintain some semblance of the housing market demand of old, and facilitate a decent living for the majority of real estate professionals, affordability will have to include keeping housing prices in line with local income levels.

The National Association of Realtors, (NAR), often blames "higher" interest rates for lower home sales and reduced "affordability". This is laughable coming from an organization that constantly lobbies for very low interest rates in the name of "affordabililty" but never met a price increase, (i.e. commission increase),  that they did not like. But let interest rates rise 1/4 of a percent and you'd think that the sky is falling.

The NAR could render themselves irrelevant if they do not take a responsible approach to reporting and realize that inflated market prices are not an indicator of recovery, but rather an indicator of another potential crash in values. 2008 left the NAR wounded in the eyes of the public, for failing to realize or admit that a housing crisis was eminent, instead of spinning the data to attract buyers who were left holding the bag when the market tanked. NAR economists have either chosen to deliberately spin the data, or completely failed to see the looming crisis even after it was blatantly obvious to everyone else. As a licensed agent, I was required to be a member of this organization for several years, and witnessed much of this propaganda from the inside. If I personally knew in 2005 that the housing market was going to tank, how could the most "respected" and "listened-to" real estate economist in the western world have missed it?