Is Sir Stuart Lipton's Next Broadgate in the Works? 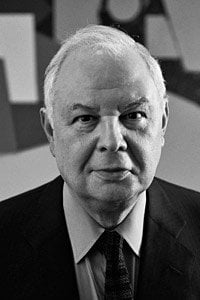 In UK developer news, a new venture by Sir Stuart Lipton (at left) and his brother architect Lord Richard Rogers is in the offing. Lipton leaves Chelsfield Partners LLP  to pursue the new venture, but will continue to be involved at the company he and partner Elliott Bernerd launched.

According to the news from PropertyWeek, Lipton's new development endeavor will work on large scale projects in London, the company will also raise capital for said projects. The dynamic brother pair worked on the Broadgate complex in London back in the 80's, one of the biggest such developments of the time. According to the reports, it appears Lipton sees a new era of design coming, he told the Times:

"...consumers don’t want plain glass boxes for offices. It is in the tough times like this that the property market gets innovative. We have to think about new ways of doing things, and large and complicated projects are our bag.”

Lipton, seen as an innovative visionary by most, was at the center of some controversy where his former dealings with Commission for Architecture and the Built Environment (Cabe) came into question. Lipton resigned as chairman, but not without some pain and agony. Despite any negatives though, all Lipton's peers admire his creativity and resilience. Back in March of 2012, his efforts at the Silvertown (above) project near the airport drew accolades.

Set to attract the likes of Apple and Microsoft the  The 50,000-square-foot glassy pavilions there are all that's fashionable for business folk. As for Lipton's and Lord Rogers' next creative play, is "the sky is the limit cliche?