CoreLogic: Cash sales on continue on a downward trend

Cash sales are slowly becoming less common as the percentage of such transactions edges back towards pre-housing crisis levels, according to a new report from CoreLogic. 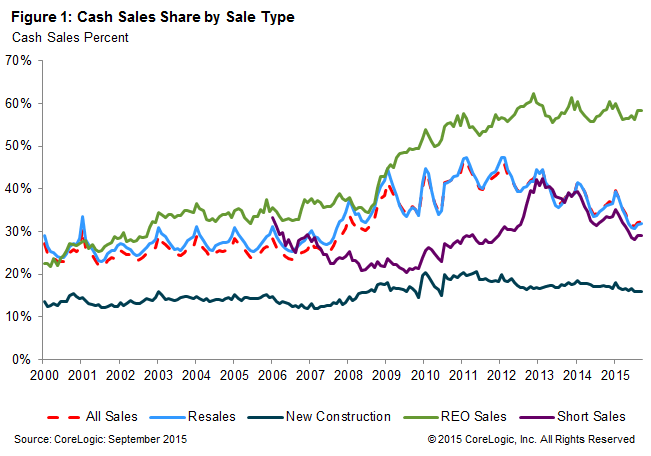 CoreLogic's September cash sales report found that just 32.5 percent of all home sales in that month were paid for in all cash. That represents a 3.4 percent decrease from one year ago, when cash sales amounted to 35.9 percent of all transactions.

September's cash sales were actually slightly higher than those of August, but only by 0.2 percentage points. However, CoreLogic notes in its report that September traditionally sees an increase in cash sales so the year-over-year comparison is more apt than the month-over-month comparison.

As such, CoreLogic asserts that cash sales are continuing their downward trend, from a peak of 46.4 percent of all home sales in January 2011.

Before the housing crisis hit, cash sales generally made up around 25 percent of all residential real estate transactions, CoreLogic said.

If the downward trend continues at this rate, CoreLogic says we'll reach “normal” levels of around 25 percent by the middle of 2017.

According to CoreLogic’s report, real estate-owned sales had the largest cash sales share in September 2015 at 58.3%.

Resales had the next highest cash sales share at 32%, followed by short sales at 29.1% and newly constructed homes at 15.9%, CoreLogic noted.

According to CoreLogic, while the percentage of REO sales that were all-cash transactions remained high, REO transactions accounted for only 6.4% of all sales in September.

For comparison, in Jan. 2011 when the cash sales share was at its peak, REO sales represented 23.9% of total home sales.

On the other end of the scale, Syracuse, N.Y. had the lowest cash sales share at 14.1%.