By Mike Wheatley | May 23, 2018
TwitterFacebookLinkedInBufferPinterestCopyReddit

The United States will likely enter the next recession in 2020, according to the 2018 Q2 Zillow Home Price Expectations Survey. 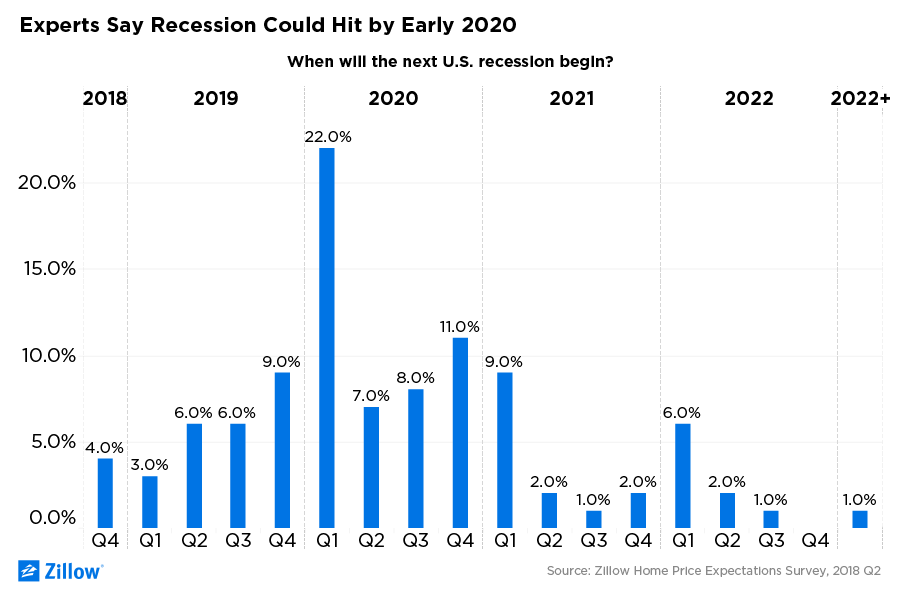 The quarterly survey, sponsored by Zillow and conducted by Pulsenomics LLC, asked more than 100 real estate experts and economists about their predictions for the housing market, including when the next recession would begin and what could trigger it.

Overall, nearly half of all the experts surveyed expect the next recession to begin sometime in 2020, with Q1 being the most commonly selected quarter. More than half of the survey respondents pointed to monetary policy as the likeliest cause.

The current economic expansion is the second longest in American history, and will be the longest ever recorded if the panelists' predictions hold true. The housing market collapse led to the Great Recession, but few experts – just nine of the respondents – think the housing market will be at the center of the next downturn.

The Federal Reserve's decisions about U.S. monetary policy will be the main factor in the next recession, according to the surveyed experts. By most measures, the economy is doing well – GDP is growing steadily, and unemployment is near historic lows. This has prompted the Federal Reserve to raise short-term interest rates four times since the start of 2017, with two more rate hikes expected this year. There are roughly even odds for a third hike before the end of 2018, but raising rates too quickly could push the economy toward slower growth, leading toward a recession.

"As we close in on the longest economic expansion this country has ever seen, meaningfully higher interest rates should eventually slow the frenetic pace of home value appreciation that we have seen over the past few years, a welcome respite for would-be buyers," said Zillow senior economist Aaron Terrazas. "Housing affordability is a critical issue in nearly every market across the country, and while much remains unknown about the precise path of the U.S. economy in the years ahead, another housing market crisis is unlikely to be a central protagonist in the next nationwide downturn."

Less than a year ago, panelists in this survey named geopolitical crisis as the most prominent likely cause of the next recession. Those concerns have fallen below policy-related fears like trade policy, a correction in the stock market or an unexpectedly high inflation rate.

In the meantime, experts think the housing market will continue to experience strong appreciation. They predict U.S. home values will rise 5.5 percent in 2018 to a median of $220,800. At this time last year, predictions were for home values to rise 3.7 percent in 2018.