Century 21 Realty Goes Social with The Sims this Christmas 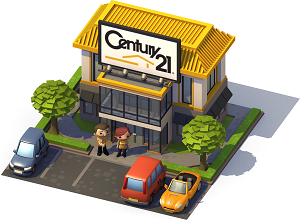 The Century 21 real estate firm has taken a novel approach to online marketing, advertising its brand on the popular Facebook game The Sims Social over the festive season.

This kind of advertising strategy is fairly low key, but nevertheless, given The Sims Social’s enormous popularity among US Facebook users, it should help the firm to attain widespread visibility across a wide audience.

During the game, players get to ‘earn’ virtual currency by decorating their virtual homes with a Century 21-branded fireplace. The end result is that gamers are exposed to Century 21’s brand, and in return they get their hands on extra funds to help them enjoy the game just a little bit more.

It’s a pretty clever move considering that many gamers might just be secretly modeling their ‘virtual homes’ along the lines of their own dream home. By associating the Century 21 brand with these thoughts, it could well drum up quite a bit of business for the firm.

“We think this is just a great opportunity to integrate with the holidays and provide those target customers with a touchpoint…  with an opportunity within the home setting for buyers and even sellers to see the Century 21 brand during the holidays.”

“We see this as a creative opportunity to deliver the dream of home ownership to millions who are intent on investing in real estate virtually, and eventually, in reality.”

Century 21 said that its advertising campaign will last for about three weeks, from December 20 until January 9.

The realty firm has tried the strategy before, reaping significant benefits from a previous advertising campaign on the SimCity Social game, which is largely played by those in the 25-year old to 34-year old demographic. During the course of this campaign, Century 21 saw a 225% increase in the number of “likes” on its Facebook page.

SimCity Social is an even more real estate-oriented game than The Sims Social, allowing users to build up a virtual real estate portfolio whilst interacting with their Facebook friends. One of the available buildings was a Century 21 real estate office, which players could build to earn more virtual currency.