CENTURY 21 Village Realty’s San Gabriel Valley office yesterday unveiled the winners of its annual sales production awards, acknowledging the company’s top performing agents in terms of sales whilst also paying tribute to its best newcomer with the “Rookie of the Year” award.

Hosted by managing broker Andy Bencosme over breakfast at The Only Place in Town restaurant in Sierra Madre, CENTURY 21 Village Realty’s agents were praised for their dedication and professionalism over the year, which saw the company recognized as one of the top 15 performing real estate agents in the greater southern California region when combined with the Ludecke, Arcadia office. Bencosme also told attendees that CENTURY 21 Village Realty’s President and CEO Rick Davidson ranked number one overall in the San Gabriel Valley region.

The award for Top Sales Producer for 2011 went once again to Nazee Rix, a resident of Bradbury, who posted the highest number of sales with the highest sales volume during the first half of the year. In tribute, Bencosme said that Nazee had displayed an extensive understanding of her client’s needs and the utmost dedication to her work:

"Nazee receives many favorable reports from her clients on the quality service surveys, and much of her business comes from referrals of very satisfied clients."

In second place came Emily Duggan, a long-time resident of Sierra Madre who has now been with CENTURY 21 Village for 22 years. Emily was described as a “smart and savvy” realtor who knows the local area better than anyone else. Emily’’s dedication and commitment are second to none, and she is always willing to put her contacts and experience to work on behalf of her clients.

Bencosme praised Emily as one of the most sought-after realtors in the Sierra Madre area, thanks to her personal attention and willingness to make an extra effort. Emily is known for supervising every stage of a deal, from a home’s preparation, to its photography, client inspections, loan and escrow details. It’s little surprise that Emily is repeatedly named as the regions “Best of the Best” among realtors by readers of a local newspaper. 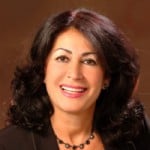 Also acknowledged at the awards ceremony was Jackie Adaimy, an Arcadia resident of Lebanese origin, who finished the year as 3rd Top Producer for 2011. Besides speaking fluent English, Jackie speaks perfect French and Arabic, but her language skills are far from being her only assets. Jackie’s belief in being “honest and open” at all times goes down well with buyers who trust her to explain to them all the facts they need to know to make tough decisions.

Finally, the award for this year’s outstanding newcomer at CENTURY 21 Village Realty’s Sierra Madre office falls to Pasadena-born Mechelle Valenzuela. A Business Studies graduate of the Pasadena City College, Rookie of the Year Valenzuela currently resides in Monrovia where she lives with her husband and two young daughters. Bencosme revealed that Valenzuela’s hard work, attention to detail and her dedication were the key factors that led to her award.

Finally, one last award handed out went to the office’s Top Producing Sales Team, which went to three generations of the same family. Known as the “Village People”, the team comprised of grandfather and former CENTURY 21 Village manager Mike Lepore, his daughter Kris Mathison and Brian Franklin, his grandson. The “Village People” finished last year in first place out of all sales teams for CENTURY 21 in the San Gabriel Valley, and came second in their region, which encompasses large swathes of Greater Los Angeles.