In the past, having a home that was as close as possible to the sea was seen as being highly desirable, but an article in the New York Times highlights how people’s perceptions of coastal real estate are changing, thanks to the effects of climate change.

Nowadays, estate agents are more likely to be asked by potential buyers as to whether a property is fortified against storm surges, how far is it above sea level, and it is equipped with sump pumps and emergency power. While other industries such as agriculture and utilities have already taken into account the potential cost of a changing climate, the real estate industry is gradually coming round to the idea that it needs to factor in the cost of damage caused by rising sea levels and flooding. However, the article points out that this is happening quite slowly whereas many experts think it needs to happen much more quickly and that buyers should be better informed. Some analysts are concerned that the economic impact of a collapse in demand for waterfront property could exceed the real estate bubbles of 2000 and 2008. This could impact real estate owners and developers, lenders and financial institutions responsible for bundling and reselling mortgages. 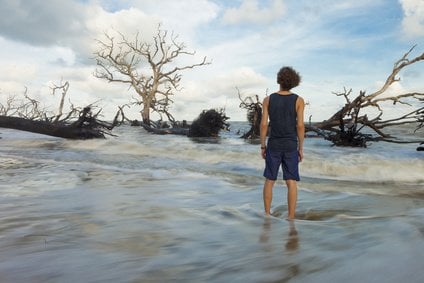 During the past five years, property sales in areas prone to flooding grew 25% less quickly than in areas that do not typically flood. Additionally, many people who own coastal property are planning to move away to safer areas. The recent results of the presidential election have added to concerns due to Donald Trump’s skepticism over global warming. In April the chief economist for Freddie Mac predicted that it would only be a matter of time before sea levels would rise and storm surges would become worse, forcing people along the coastal regions to leave, potentially abandoning their mortgages and triggering another housing crisis where real estate prices would be unlikely to recover. For many people, the increasing cost of flood insurance is a worry, with rising premiums resulting in falling property prices.

Florida could be particularly vulnerable having 6 out of 10 of the urban centers in America viewed as being most vulnerable to storm surge. Every year Southeast Florida has about 10 tidal floods, a number anticipated to increase to around 240 floods annually by the year 2045. In high-risk flood zones in Miami-Dade County, real estate sales have dropped by about 7.6% whereas in comparison with estate sales have nationally increased by about 2.6%.