Connected applicances bring Internet of Things to the home

Washer, dryer, and water heater, get ready to meet smartphone, tablet, and app.
Hooking up time-honored home equipment to the Internet is the latest trend being touted by some of the biggest names in the appliance industry at this year's International Consumer Electronics Show in Las Vegas. 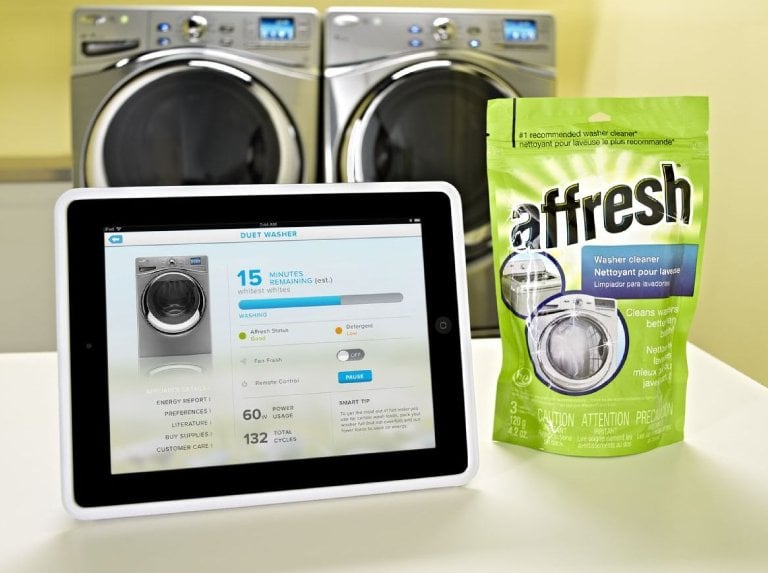 This spring, Whirlpool Corp. will roll out Wi-Fi-equipped laundry machines that can download custom cycles, alert you if a load is unbalanced, and spot mechanical problems before they get out of hand. The new appliances, on display at Whirlpool's CES booth, communicate wirelessly with a dedicated app that will also let you start them remotely, offer instructional YouTube videos, and even make a charitable donation when you begin a new load.

Whirlpool plans eventually to expand the app-based technology to other categories of appliances, such as ranges, ovens, and refrigerators. The company's booth at CES features an exhibit that displays its vision for the kitchen of the future, a concept that closely integrates appliance operation with the cooking requirements of specific recipes.

Another appliance maker exhibiting at CES, Robert Bosch GmbH, is also close to bringing wireless connectivity to its products. The German company has developed an app, dubbed Home Connect, that will control and monitor devices such as water heaters, thermostats, and refrigerators. It will be released in Europe later this year. Bosch expects to introduce the technology in the United States as well, but hasn't said when.

The drive toward linking devices to one another — an accelerating trend known as the Internet of Things — is spawning innovation across the electronics industry and playing a prominent role at CES.

In a packed keynote address at the start of the show, Boo-Keun Yoon, president and CEO of Korea's Samsung Electronics Co. Ltd., declared that 2015 will be the year when many of the futuristic promises companies have made about getting devices to work together will finally become real.

"These are not pipe dreams anymore," Yoon said, adding that by 2017, 90 percent of the products Samsung produces — including TVs, mobile phones, and home appliances — will be linked to the Internet of Things, or IoT.

Yoon also said companies must take steps to ensure that the IoT-based products they manufacture adhere to open standards, so equipment from one company is able to work with software and hardware from another.

Yoon was joined onstage by other leaders of the IoT movement who laid out their vision for a world where machines go beyond communicating with each other to responding to — and even anticipating — people's needs. For example, working in tandem, a user's smartphone, heating system, and other Internet-linked equipment could learn when that person tends to go to sleep and under what conditions. Then it can adjust the temperature of the user's bedroom to promote a good night's sleep.

Many companies exhibiting at CES are developing products that aim to take advantage of the ability of individual devices to communicate.

Engineers at Baintex, a startup based in Valencia, Spain, showed off its unreleased mobile app and an array of related devices that control and monitor a host of home functions. The Sentio system's capabilities include remotely turning lights on and off; opening, closing, and securing doors; and tracking how much energy is being consumed in various parts of a home, said Alberto Sendra, lead mobile applications engineer for the company.