Almost a century ago there was a trend for so-called "kit homes" which could be purchased through catalogs - you remember those old things, right?

Well now, those who purchased those vintage homes in the early 1900s could be set for a windfall, with experts saying they might be able to sell them at a massive profit. 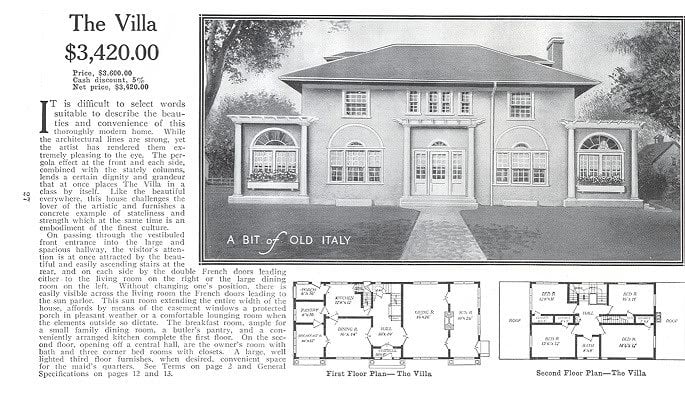 So-called Kit homes date back to 1908, when department stores like Sears, Roebuck & Co. began selling them through their catalogs, a practise it continued until 1940. At the time, Sears offered more than 370 different styles of homes to choose from, including bungalows and colonials. Prices were not bad either, ranging from $600 to $6,000 in the 1920's, which works out at a very favorable $8,400 to $84,000 in today's money. The construction materials, including lumber, windows cabinets, nails, paint and more, were delivered directly to the customer's lot for assembly.

The popularity of kit homes has long faded from memory, but those who've held onto these classical properties could finally see their patience pay off. Due to the historical significance of these homes (the concept seems almost unreal today), they're the subject of strong demand and high offers from some interested buyers. In one example, the Wall Street Journal reports, Anna Mackler a salesperson for Long & Foster Real Estate in Bethesda, Maryland, decided to list her own kit home along with the following tagline: “Own a piece of history!”

Mackler promptly sold her home last May for $636,000, almost $200,000 more than she was asking for. She later told the WSJ that she was able to make the property "more appealing by adding to its character," with her description that highlighted its Kit home origins.

Mackler isn't the only one seeing demand for kit homes. As more people come to realize their significance, Catarina Bannier, a sales associate with Evers & Co. Real Estate in D.C., told the WSJ that she's receiving growing numbers of calls from people who want to find out if their home is a kit home, and if so does that increase its value. Bannier sold a five-bedroom, 1920s-era kit home herself last April for a whopping $2.75 million.

That's not all. Russ Lawrence, a real estate agent with F.C. Tucker Company in Indianapolis, recently listed a newly renovated 6,000 square foot home for $725,000. The home was actually bought from Sears, which means it ranks as one of the 'crème de la crème' of kit homes. “Every single person who sees it mentions the Sears history,” Lawrence said. “There’s a curiosity factor.”

Believe it or not, there are some kit homes still being produced today. Shelter-Kit, a company based in Warner, New Hampshire, sells kit home components which can be used to construct an 8,000 square feet home for the admittedly quite expensive price tag of $300,000. That price includes everything needed to build the outer shell of the home, but it doesn't include interior materials such as the electricals and the plumbing.

Gone are the days when kit homes represented a bargain!