By Mike Wheatley | May 24, 2018
TwitterFacebookLinkedIn3BufferPinterestCopyReddit
3
SHARES

The National Association of Home Builders says a rising number of single-family homes are being constructed for the rental market, according to its chief economist Robert Dietz. 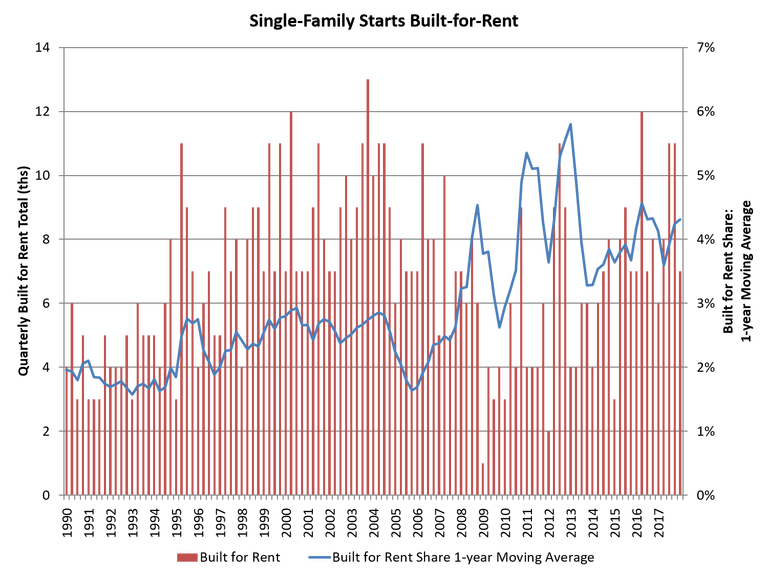 Dietz said in a blog post that although most new homes are still built for the home purchase market, the number of properties “built-to-rent” is rising rapidly as developers seek to fill a gap in the market.

The NAHB said there were 37,000 construction starts of single-family built-for-rent homes in the last four quarters, up from 33,000 in the prior four quarters. On a one-year moving average basis that means the built-for-rent market accounts for 4.3 percent of all single-family home starts in the first quarter of this year. In total there were 7,000 new home starts in this category, which excludes homes sold to a third-party for rental purposes.

Dietz wrote that the Great Recession of last decade, coupled with a decline in homeownership, has spurred more interest among developers in build-to-rent homes. However, he said that although the current market concentration of such homes is elevated, “the total number of single-family starts built-for-rent remains low in terms of the total size of the building market.”

“As homes age, they are more likely to be rented,” Dietz said.