After three months of decline, existing home sales picked up in September compared to the month before, but annual gains were muted due to low inventories and recent hurricane disasters, the National Association of Realtors said on Friday. 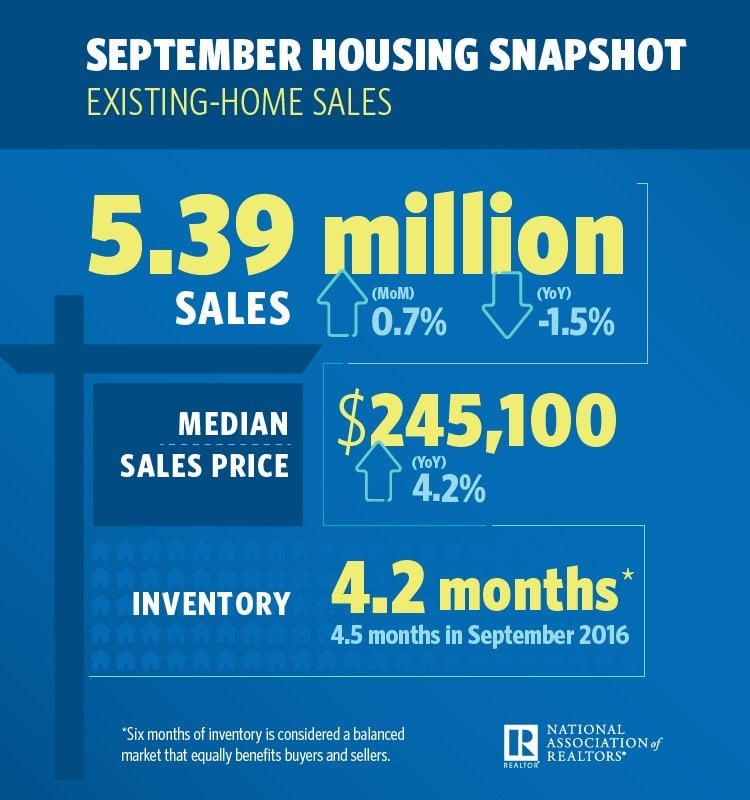 The NAR said in its report that existing home sales, which includes single family homes, townhomes and condos, rose by 0.7 percent to a seasonally adjusted rate of 5.39 million units in September. However that’s still a 1.5 percent decline from one year ago. September also marked the second slowest month for home sales in over a year, NAR officials said.

“Home sales in recent months remain at their lowest level of the year and are unable to break through, despite considerable buyer interest in most parts of the country,” said NAR Chief Economist Lawrence Yun. “Realtors this fall continue to say the primary impediments stifling sales growth are the same as they have been all year: not enough listings—especially at the lower end of the market—and fast-rising prices that are straining budgets of prospective buyers.”

The NAR said however that sales activity would likely have been stronger if not for the impact of Hurricane Harvey and Hurricane Irma, which hit Texas and South Florida this summer, causing “temporary but notable declines” in sales, according to Yun.

Home prices: The median existing-home price for all housing types was $245,100, up 4.2 percent from a year ago. “A continuation of last month’s alleviating price growth, which was the slowest since last December, would improve affordability conditions and be good news for the would-be buyers who have been held back by higher prices this year,” Yun said.

All-cash sales: These transactions comprised 20 percent of sales, down from 21 percent a year ago. Individual investors accounted for the biggest bulk of cash sales; they purchased 15 percent of homes, which was the same level as a year ago.

Inventory: Housing inventory at the end of the month increased 1.6 percent to 1.9 million existing homes available for sale, but it still remains 6.4 percent lower than a year ago. Unsold inventory is at a 4.2-month supply at the current sales pace, down from 4.5 months a year ago.