By Broderick Perkins | May 4, 2012
TwitterFacebookLinkedInBufferPinterestCopyReddit

Studies have documented a correlation between foreclosures and everything from nausea, fevers and abdominal pain to hypertension, depression, chest pain and diabetes - in adults. 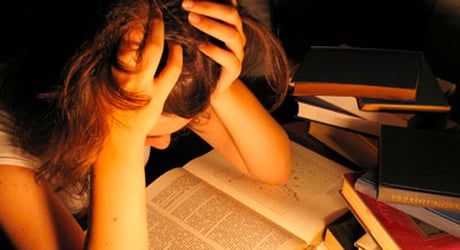 Children, however, have been the unseen victims of a lost home - until now.

"Housing disruptions due to foreclosure are just as traumatic for kids as losing their homes to a tornado or hurricane - except this disaster will hit one in ten children. Being forced from home affects children’s health, interrupts development, and hurts their chances of success in school," said Bruce Lesley, president of First Focus, a bipartisan advocacy organization that believes children and families should be a priority in federal policy and budget decisions.

First Focus commissioned the Brookings Institution to generate "The Ongoing Impact of Foreclosures on Children," which found 8 million children affected by foreclosure fallout. 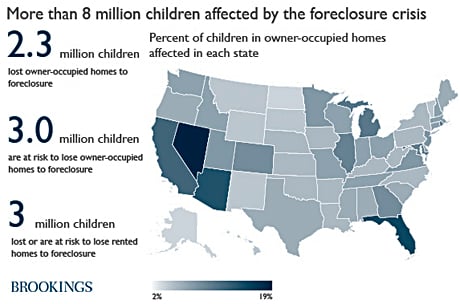 Families threatened with foreclosure often move out. Kids forced to switch schools often face staggered academic achievement - they have lower levels of math and reading achievement than those who don't move.

Even after controlling for poverty and other family characteristics that are associated with residential mobility and poor academic performance, each move is associated with a reduction in math and reading scores by about one-tenth of a standard deviation -- the equivalent of missing a month of school.

Subsequent moves have a compounding effect, each reducing scores by the same deviation.

Frequent changes in schools at both the elementary and high school level also is associated with higher rates of high school drop out.

The study surmises, dropping out may be due to a combination of academic and behavioral issues. The financial and psychological stress foreclosed families face affects the way parents parent and leads to harsher and less supportive parenting.

Isaacs says educators interviewed by the Governmental Accountability Office (GAO) reported concerns about kids' social adjustment and the challenges that arise when schools must adjust the instruction pace to bring transferred kids up to snuff.

An adjusted instruction pace impacts not only transferred students, but also can have a negative effect on other students, because of teacher and school resources spent on high student turnover.

According to the report, foreclosures and housing instability also have a negative impact on physical and mental health in adults and kids feel it too.

"Is the Foreclosure Crisis Making Us Sick?" by the National Bureau of Economic Research (NBER), the agency that tracks recessions, found:

• An increase of 100 foreclosed properties, caused visits to emergency rooms and hospital admissions for hypertension and diabetes to rise 7.2 percent and 8.1 percent, respectively.

• For every increase of 100 foreclosed properties, there was a 7.5 percent rise in health care visits for general malaise, including fever of unknown origin, abdominal pain and nausea.

• An increase of 100 foreclosures was associated with a 12 percent increase in visits for help with anxiety.

"Children are the often invisible victims of the foreclosure crisis. Foreclosure affects not just the homeowner or landlord, but also the children living in the foreclosed properties," said Isaacs.