Driverless cars have long been consigned to the realm of science fiction, but that idea is changing rapidly as the technology slowly becomes a reality. 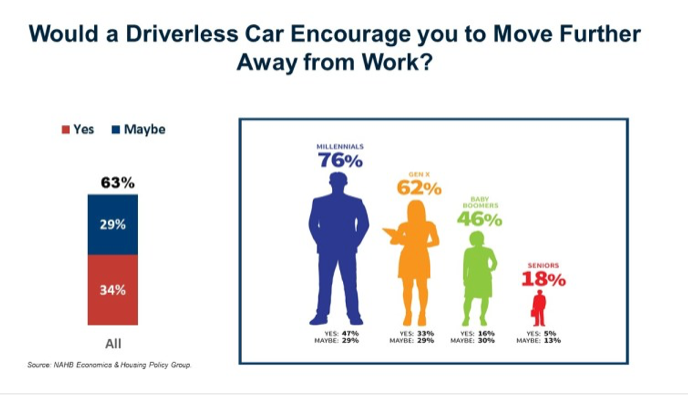 Driverless cars are likely to hit the roads in a big way within the next decade or so, according to many experts, and that could have a big impact on people’s ideas on where they should set up home, according to a new National Association of Home Builders survey.

The NAHB’s survey found that 63 percent of consumers would “definitely” or “maybe” consider living further away from their place of work if they owned a driverless car. Younger people were the most likely to live further away if driverless cars become a safe and reliable option for commuting, the survey shows. In total, more than 60 percent of respondents among millennials and generation X’ers said they would consider doing so, compared to just 18 percent of seniors.

“Real estate might be the industry that is most transformed by autonomous vehicles,” David Silver, who teaches self-driving engineering at Udacity Inc., told Bloomberg. “It could change real estate from a business that is all about location, location, location.”

Ric Clark, chairman of Brookfield Property Partners LP, a large real estate investment firm, told Bloomberg that he’s already considering what to do with the real estate space that could be freed up by the wide-scale adoption of driverless cars. Brookfield owns around $152 billion worth of real estate assets in the U.S., including around 175 shopping malls nationwide. Clark said that the “biggest physical acreage” of these malls is their “surface parking lots or structured parking”. These spaces could well become unnecessary in future, if self-driving cars catch on, Clark said.

“For years, we have seen this stuff and thought we would love to build apartments or maybe if there is a higher and better use we could build on it,” Clark said.

Indeed, if the need for car parks was eliminated, the available space could be used to build entirely new neighborhoods. In New York City for example, the total area of its car parks is equivalent to two Central Parks, according to estimates by Moovel Lab.