Looking to Asia for a chance to emulate good innovation may not be a bad idea for some American real estate companies. One company in the region, iProperty Group, has established a finely meshed network where none previously existed. With 18 property websites throughout Asia and the Pacific, this company actually launched the very first regional commercial property website. But CommercialAsia.com is not the "end all" where Asian property online is concerned, the team behind this Asia property engine offers clues into success online.

Whether you want to buy or rent a property, iProperty Group probably has you or your business covered for finding, investigating, and making choices for the Asia real estate market. With sites covering locals from the Philippines and Indonesia, to Hong Kong and Malaysia, a score of portals show off the best of Asian properties. Let's take a look at just a few of these, and more importantly, the organization behind them.

This niche portal (below) is aimed at the home owner intent on listing their own properties. it is interesting to note, that while this Asia market is a relatively new one online, that iProperty has built and scaled a fairly cutting edge site here. At least compared to many, many North American counterparts. News, forums, blogs, and some key resource leads, the site is not a full on full up repository yet, but it does seem to be the "go to" FSBO site in Malaysia.

GoHome Hong Kong dot com is a multilingual real estate portal akin to one of the American listing aggregators. The Chinese language version may not be the cup of tea of interested English speaking house hunters, but English and shows off a vast information port for anyone in the market. I do not personally like sites of the type, they seem too cluttered, but the point is - iProperty has covered the niche where others have not. By contrast, Hong Kong Homes may have a cleaner site, but it is two dimensional by comparison with the listings at GoHome. The screen below shows the look of the landing.

We could show all the websites iProperty Group operates, but domain names and site design (even proliferation) are not all there is to engaging a market. Taking a deeper look into Indonesian rumah123.com (yes, people in Asia love colorful), you'll also find a fairly massive social media engagement. The Twitter feed is almost constant and responsive, even though @rumah123  does not quite follow enough, it's easy to see the company focus is spot on. Ditto for Facebook, the company has 123,000 plus likes and they talk it up every single day. The images from this Facebook profile tell all. People, properties, execs, sales folks, buyers, and pretty parts of the countryside, you name it - I would go to these people to buy. No questions asked.

There's no real need to dig deeper, companies like iProperty are all about capitalizing on successes, using success as a template. Where you see one superb engagement, sooner or later you'll see the others fall in line, like ducks in a row. As soon as I saw how this company did social media, it was clear somebody there uses his or her brain.

Mobile sites, commercial and residential, social media, even the upcoming iProperty Expo tells of a company moving forward fast, a company some other regions could emulate. And where one finds leaders, one also finds sponsors, in case you're in need. The Expo has a leading lineup of developers and other industry entities like; UEM Land (Malaysia),  Property Barrons (low high conversion), Bright Heritage (engineering), Bina Puri (construction), and many others. 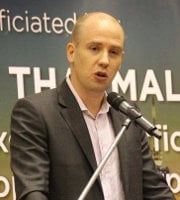 Led by Simon Baker and Patrick Grove (image top), iProperty is vested with experts across a wide array of fields. Baker, for instance, is an online revenue driving machine. He is also CEO of Classified Ad Adventures, as well as the decision maker for several past key online developments. As for Grove, he is Co-Founder of iProperty, but that's just for starters. He is also the modus behind Catcha Group, a leading media investment company in South Asia. The due make for a powerful skill and influence set, marrying ad and online reach with events and media, the results can be seen.

Now add in still more key execs, like CEO Shaun Di Gregorio (above left), and the term "Team" takes shape. As a last professional accolade, Di Gregorio former head of the Australian operations of the REA Group, Sean is the field general in the trenches. For a lesson in team building, here we have great and enthusiastic soldiers (evidence the real people in SM), and segmented expertness in command (leaders in online, events, media, real estate).

While we make special note of the leadership here, the real tale of a good company story resides in their chosen employees, we leave you with Nazrin Mohd Nasir, one of the company's enthusiastic partners who won an iPad for contributing. We can learn a lot about contributing, growing, and success from watching such companies. Read the financial at Bloomberg, for other clues.