LinkedIn & Zillow identify where to live to have more disposable income

There's a good reason thousands of technology workers are flocking to Seattle: the math works out. Tech workers who rent in Seattle can expect to have around $5,500 left over each month after covering taxes and rental housing costs. In San Francisco, they're left with about $4,000.

Zillow and LinkedIn's research combined housing and employment data to analyze a common set of priorities: an affordable rental home and a good job. The two companies used job listings data, salary data, and the percent of workers hired in the past year in three industries: health care, technology, and finance. By analyzing income tax rates and Zillow's median rent data, they were able to find housing markets across the country where those workers can pocket the largest share of their income after paying rent.

For technology workers who rent, Seattle, Austin and Pittsburgh, Penn. came out on top among the housing markets analyzed, with the Bay Area at #4. Finance workers will find job and rental housing harmony most easily in Charlotte, NC, Dallas-Fort Worth, and Phoenix. Healthcare workers' best bets are Phoenix, Indianapolis, Ind., and Boston.

Over the past decade, housing prices in coastal markets have shot up, in large part due to demand from workers following high-paying jobs. West Coast housing affordability is the worst in the nation; renters and home owners there often spend nearly half the median income to rent a typical home, while a rental in the middle of the country costs more like 25 percent of the median income.

Perhaps one of the biggest surprises of the findings is that tech workers do OK in the Bay Area, despite its notoriously high housing prices. The median home value in the San Francisco area is $789,300. Taking a tech job in the Denver area, where the median home value is $348,700, actually costs the average Denver tech worker about $140 a month, considering lower salaries there.

Salaries for other industries don't hold up as well in the San Francisco area, though. Even highly-paid finance workers keep only about 32 percent of their incomes after paying for housing and taxes. In Charlotte or Chicago, they can pocket a median of 61 percent. 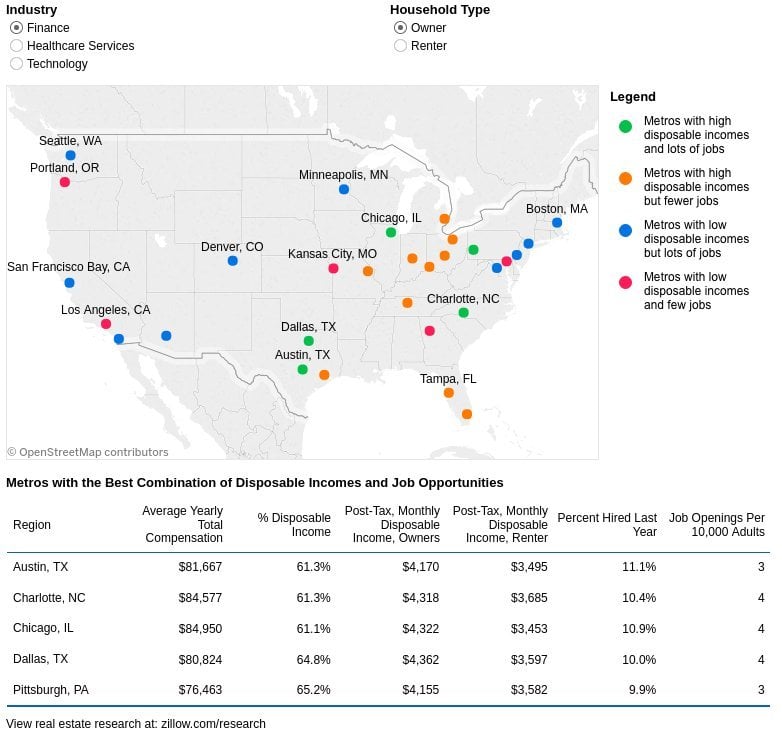 "High demand and inventory shortages have driven up housing prices in some markets so much that even if you land a great job, the salary might not cover living within commuting distance," said Zillow Chief Economist Dr. Svenja Gudell. "On the other hand, the nation's most affordable housing markets don't always offer plentiful employment opportunities. Housing is the biggest line item in most people's budgets, so we did the math for you and found 'sweet spots' -- places with great job markets and housing markets that will leave you with some cash at the end of the month."

"As we've seen in LinkedIn's Workforce Reports, hiring has been strong in the U.S. We also know that having insight into where your earnings go further is important to job seekers," said Paul Ko, the head of analytics for LinkedIn's Economic Graph. "That's why these Sweet Spots are so attractive, as these cities are experiencing higher-than-average hiring rates, combined with good salaries and more disposable income."

For more information about methodology, check out Zillow Research.