Naturally, Memphis was on the list when the Travel Channel went looking for locations to film "American Grilled". In a city famous for its many grilling chefs, it doesn't hurt to have the show label you as a star Master Griller. Those are impressive bragging rights and the $10,000 prize money doesn't hurt either.

The title of the episode is "Battle on Beale Street" with Clint Cantwell beating out three other contestants to be declared the winner. This is the show's first season and it's filmed on location in different cities across the country. It's similar to the format of the Food Network's "Chopped". Local ingredients are used as mystery ingredients and one of four contestants are eliminated in three rounds. A panel of three judges makes the decisions of who moves forward after each round. Clint Cantwell was the one still standing at the end of the Memphis episode. 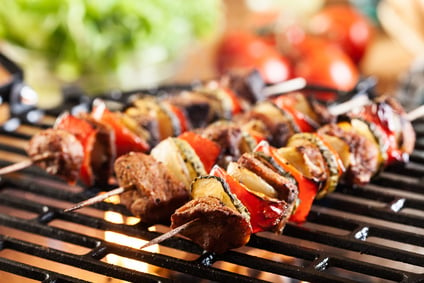 Chef and judge Kelly English complimented Clint for his unique and nontraditional use of the mystery ingredients bologna and red cabbage in round one. Clint came up with a bacon wrapped smoked bologna with mustard and a grilled red cabbage sauerkraut. Clint commented that his goal was to showcase the local ingredients in the best way he could think of.

Clint has a background in grilling but only recently moved to Memphis from NYC. However, he's originally from Texas so he was showing New Yorkers a thing or two about grilling while he was there. And he's not brand new to Memphis either. His wife's parents live in Memphis and Clint and his wife have been coming to Memphis BBQ contests for many years.

Clint entered his first BBQ competition in Long Island, New York in 1997. After that, he has been competing in dozens of competitions every year. While in New York, Clint organized the competitive BBQ team "SmokeInDaEye" that caught the attention of Kingsford Charcoal. The company hired him to help develop and edit the blog grilling.com. A part time job he still does today. By career, Clint owns and operates a public relations business. One of his clients is the Memphis Barbecue Co.

Making the Cut for the Show

The original interview process was done long distance via Skype. The original group was narrowed down and those making the cut were brought to the network. When Clint made the first cut, he knew he had a real chance at being on the show. In preparation for the contest, he did try practicing a little at home. However, he said there wasn't much he could really do to prepare because no episodes of the show had aired and he had no idea what the cooking set up would be, the time restrictions he would have to work within, or what curve balls might be thrown at him. About the only thing he could do was to experiment grilling some unusual ingredients.

Winning the "American Grilled" Grill Master title in Memphis isn't Clint's first experience with television. He has also appeared on CNN, Fox News, Nightline, Food Network, Spike TV, Newsweek, SeriousEats.com, Eater.com, Today show online, and others. Clint continues traveling the country in search of the people, places, and tastes behind our shared grilling culture. One thing you can say about Clint is that he takes his grilling and BBQ seriously. Clint is now one more grilling legend hailing from Memphis.