Just 18 percent of homes listed for sale in the U.S.'s 30 biggest metro areas were affordable for middle-class Hispanic families in 2016, and just 14 percent were within the financial reach of African-American families, according to a new Redfin study that shows how certain demographics are being priced out of the market. This is compared to 30 percent affordable for those earning the median income for white households, down 12 percentage points since 2012. 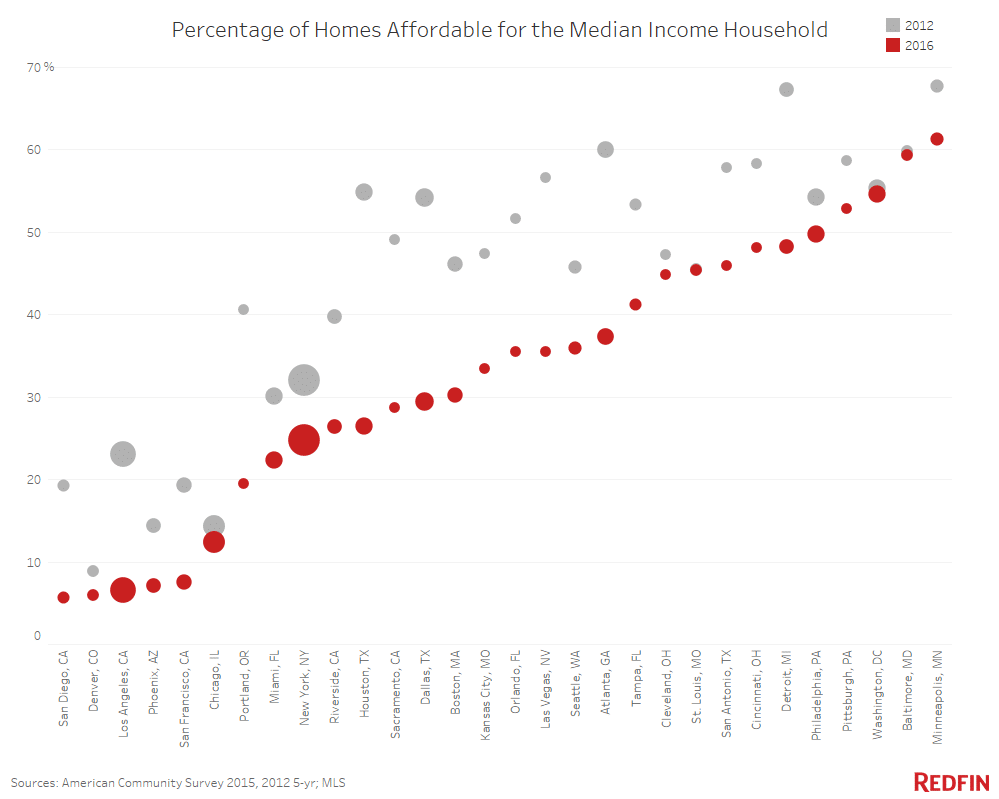 Housing affordability in general has decreased over the same four-year period for the entire middle class, thanks to home values rising by 26 percent compared to salary rises of just two percent on average. Back in 2012, 44 percent of all listed homes were affordable to middle-classes, but in 2016 that fell to just 32 percent.

The study also highlighted those markets which are particularly expensive. Redfin found that middle class African-Americans and Hispanics were all but priced out of homeownership in Denver, Los Angeles, Portland, San Francisco, San Diego and Phoenix. Less than five percent of available homes in each of these markets were considered to be affordable to those on median household incomes for African-Americans and Latinos, Redfin said.

Even so, Denver actually had the smallest racial gap in housing affordability last year. The report found that under two percent homes for sale there were affordable to families earning the median income for African-American and Hispanic households, compared to just 8.3 percent for families earning the median income for white households. Minneapolis saw the largest racial affordability gap among the top 30 metros, with typical white families able to afford 66 percent of all homes on sale, compared to just 5.2 percent for African-Americans, and 24.8 percent for Hispanics.

Also in the same period, metros known for their relative affordability, such as Atlanta, Tampa and Kansas City, all saw double-digit declines in the share of listings that were affordable on African American and Hispanic median incomes.

St. Louis was the only metro in the country that actually saw increases in affordability for both Hispanic (+5.4 points) and African-American families (+4.3 points). Interestingly, St. Louis was also the only metro where overall middle-class affordability, including for median-income white households, did not change significantly over this time period.