Real Estate Marketing & Beyond
Home » Housing » US Real Estate » The Economy, Monkey See, Monkey Do, and You
Double-click to edit button text.
X

The Economy, Monkey See, Monkey Do, and You

The stock market plummets over 500 points, mortgage fraud, worldwide economies on the brink of chaos, jobless rate stagnant, huge corporations felling whole rain-forests - global meltdown imminent. Isn't it about time someone sound the fire alarm? I mean, we are taught not to bust the glass and pull the red lever in grade school, that is, unless there is smoke - but markets are billowing smoke these days?

An FBI crackdown in the news yesterday spotlights at least 14 suspects in a $60 million dollar Mortgage Fraud Scheme, just what a beleaguered industry needed, more good PR. According to this news, one Gerard Canino conducted an orchestra of five loan officers, four attorneys and one disbarred attorney, in what amounted to a shell game of so called "straw buyers" garnering loans they never intended to pay. Prosecutors say the five year scam involved the alleged conspirators coaxing co-conspirators into applying for money for big payoffs when the deals went through.

And in collateral news, it appears investment banks, Wall Street gurus, key politicians, and anyone associated with the stock market - well, it appears they have no clue what is going on. All those Obama stories of incremental increase, the pundits of gradual economic incline, Realtors  chugging out press releases about Q1, Q2, and every-single-home-sale-or-rental they close on - it's all malarkey.  All the gains over the last year were wiped out yesterday when the Dow spared no victims - the market declined over 4 % in an instant.

Listen to the Don Henley hit Dirty Laundry for context from here on out.

Meanwhile (as your blond newscaster assures you of prosperity), back at the ranch in Europe, it looks like Spain and Italy will join Greece and Portugal in the economic cellar. My only curiosity is wondering how come more people are not panicked? The situation on Earth these days reminds me of the old question; "If a tree falls in the forest, and there's no one there to hear it, does it still make a sound?" This is how people treat live on Earth in 2011. Monkey see no evil, hear no evil, speak no evil - except these days the monkey is hiding, quivering in a cave. "Does the monkey hear, see, or speak, if we cannot hear him?" Evidently not, not one single problem has been solved since 2008. Wake up.

Presidents, all presidents in the last 100 years, have uttered a simple truth - "We are going to have to make some tough decisions America." Unfortunately, neither the politicians nor the people are willing to follow through - our whole world is run a bit like the household where the soccer mom demands her Johnny get this, is awarded that, could never be guilty of this - a spoiled constituency led by bubble headed bleach blond "It's a Small World" lunatics - bent on fantasy. Sorry to be so blunt, but I make tough decisions every day. 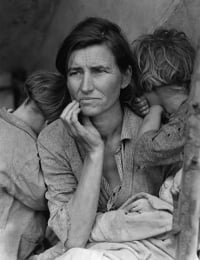 Okay, the reader out there with enough gray matter to matter, who has read this far, is asking; "So what's the solution smarty pants?"  The tough road, rocket scientist! This is not a recession, not even a so called " Great Recession" - the situation is worse than the Great Depression, and one HUGE reason it is? Is because no one is admitting it. PR and spin have become so powerful leaders are convinced they can hide anything - and they are not far from wrong. Imagine F.D.R. trying to convince people in 29 that their farms were safe? That industry was afloat. That drastic measures were not needed. The unimaginable is the now.

Look, I know you are busy, your family, your job, your golfing buddies, the Jack Daniels is calling loudly, but I suggest you read that Wikipedia article linked to up there - ALL OF IT. Then sit at the 19th hole, and you and your buddies talk about this, and not Tiger Woods' mistresses. At least for a change. Here's the real bottom line for America and Europe - the chart above from Wikipedia showing industrial production down by over 40 %, this is the key economic indicator for depression.

Now, and watch closely. Since 2001, when American politicians advocated the trade conduit to China - manufacturing in the US (and in Europe) was negatively affected by an even greater margin. Let me state this again, in more precise terms - your own governments caused the current "depression" when they shipped your jobs to China. It#s as simple as that. Here is a PDF from the American Manufacturing Organization to illustrate.

In conclusion,  President Obama's chief economic advisor, Austan Goolsbee, is stepping down, and probably for good reason. Taking what I have said in one vane, no economist with half a credible bone in his or her body could readily argue with these facts. We can count the beans all we want, but weighing the beans is more important than counting them in this case. Ten million cars does not equal 10 million blogs - that sort of thing. It's time you took a more active role in questioning the bean counters - and especially these inept leaders. Now, look at the change in jobs because of China trade in the chart above - notice anything interesting? A direct correlation between job loss in 29 and now! What difference does it make where the jobs went? They went.

Thanks to Don Henley for the song Dirty Laundry.