There’s good news in store for homeowners as 2017 kicks into gear – home prices were felt across the nation over the last year, and experts from CoreLogic say that trend is likely to continue for some time to come. 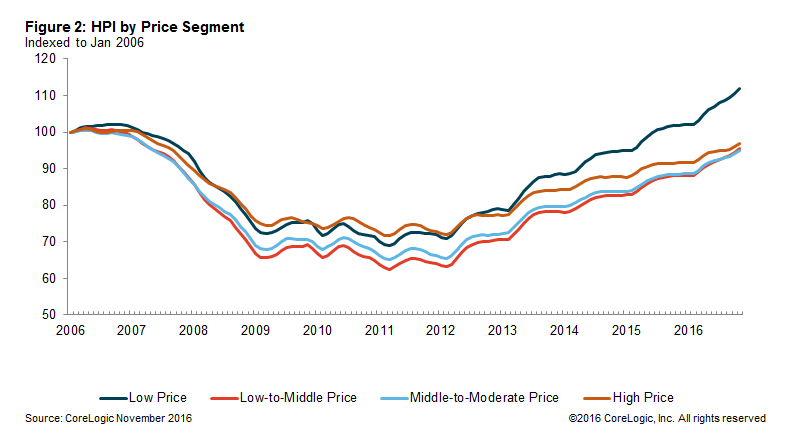 Last November, home prices rose by an average of 7.1 percent compared to the same period one year before, according to CoreLogic’s latest Home Price Index. And the analyst firm reckons more price jumps are in store this year too, though they’ll likely come at a more modest pace. CoreLogic’s forecasts say that home prices will likely rise by another 4.7 percent between November 2016 and November 2017.

“Last summer’s very low mortgage rates sparked demand, and with for-sale inventories low, the result has been a pickup in home-price growth,” Frank Nothaft, CoreLogic’s chief economist, said in an interview with the press. “With mortgage rates higher today and expected to rise even further in 2017, our national Home Price Index is expected to slow to 4.7 percent year-over-year by November 2017.”

In a further update, CoreLogic CEO and President Anand Nallathambi revealed that home prices in 27 U.S. states have now risen past pre-crisis peak levels, heading into uncharted territory. The biggest gains of any U.S. state were seen in Oregon, which saw home prices rise by 10.3 percent year-over-year in November 2016. Washington came in second with a 10 percent increase year-over-year. As for the worst performing state, Nevada still has some way to go as home prices remain 32 percent below their March 2006 peak.

Nationwide, the CoreLogic Home Price Index is still 4 percent lower than its April 2006 peak, but the analyst firm says it won’t stay that way for long.

“It should surpass that peak by the end of 2017,” Nallathambi predicted.