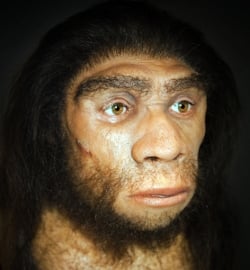 You're real estate sales have slumped by more than half. You tried hooking up with buyers via Twitter, but somehow those 200 followers just never bit. Facebook flopped, G+? That sounds like another Twitter only with a shorter name. Does this sound familiar? You could be a dying breed if it does.

Realtors, we have found, are not exactly prime candidates as social media gurus. As it turns out, neither are many top CEO's. You'd think decision makers would jump at the chance to enable new channels, but you would be wrong too. The ReMax agent at left thought stone tools were frivolous too, look where he is now. Just because you tried using wet flint to start your business fire, does not mean fire cannot be created.

Looking at the infographic below, what many perceived as an advantage of youth at the onset of Web 2.0, turns out to be just that. The graphic illustrates a steadfast resitence by older decision makers to adapt to technological change, even in the face of devastating competition. Just how difficult can it be to adopt these new social media strategies? (click the image for the larger version)

Nearly half of all 50+ CEO's get their business intelligence someplace besides via a mobile device! This seems astounding. Talk about giving away an advantage. If we interject that brokers are in effect, CEO's, imagine the opportunity costs there. It's worth thinking about, Baby Boomers simply retiring instead of fighting an un-win-able fight during these economic times. In the end, that's what you're doing giving up digital and social channels to your competition. Just because twitter seems stupid, can you afford not to compete? Food for thought, I am on G + if you need help.