Pittsburgh ranked as the best U.S. city for beer lovers

If you’re feeling hot and thirsty in Pittsburgh, then your luck’s in: The city has just been ranked as the number one in the U.S. for beer lovers, according to a new report from Redfin. 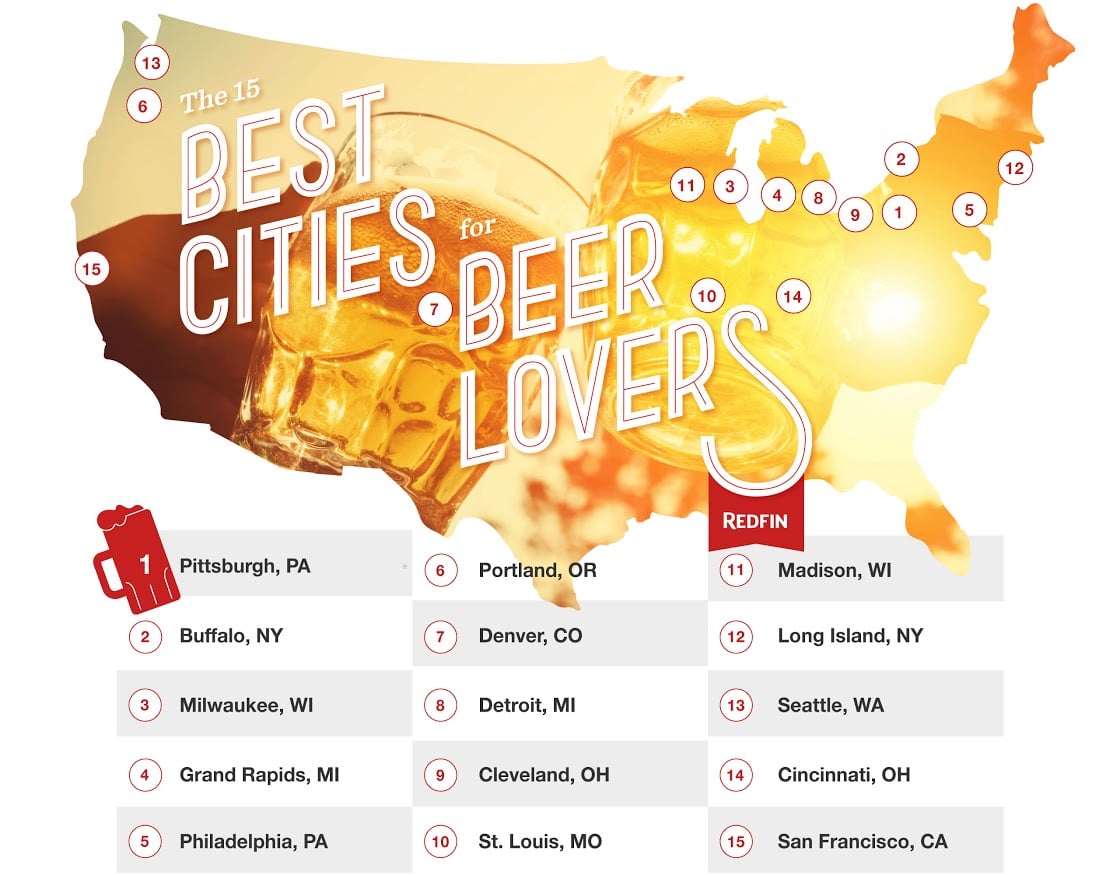 Pittsburgh, a city known up and down the country for its legendary Iron City beer, ended up in first place in Redfin’s study, which was carried out in collaboration with the Beer Institute. The study ranked “the best cities for beer lovers” according to strict criteria that takes into account a city’s beer taxes, the number of breweries per 100,000 drinking-age adults, active brewery permits, median home prices and walkability.

The first three criteria are self-explanatory, while walkability is an important factor for beer drinkers bearing in mind that no-one in their right mind should ever drink and drive. As for median home prices, well, the less one spends on a home the more beer they can afford to drink! Makes sense to us.

Anyhow, it seems that there’s no place quite like Pittsburgh for beer lovers, which landed on top of the pile thanks to it having two breweries per 100,000 adults aged over 21, 256 active brewery permits and a very helpful state beer tax of just $.08 per gallon.

“Pittsburgh has always been what I’d call ‘a beer and a shot town,’ with our blue collar roots,” said Keith Jimenez, a Pittsburgh Redfin real estate agent. “Back in the day, all the steel workers would meet at the bar for an Iron City beer and a shot of whiskey. Today, those roots are alive and well. You’ll still find Iron City in most bars, but we’re also seeing a boom in craft brewing. There are lots of microbreweries, particularly in the Southside.”

Pittsburgh was closely followed by Buffalo (2nd place) and Milwaukee (3rd place) in what seems to be a very Rust Belt-centric list of the nation’s top beer towns. Grand Rapids, MI, ranked in 4th place, with Philadelphia, PA, rounding out the top five.

Portland and Denver — both well-known beer destinations - had nearly three times as many breweries and more permits than Pittsburgh, but the steel city’s lower house prices ensured it took the top spot. Redfin also remarked on the absence of any major West Coast cities in the ranking, saying the rapidly rising prices of homes in the area made them unattractive for those who’d rather spend their money on beer.