Redfin, the next-generation real estate brokerage recently announced its annual list of hottest neighborhoods predicted to be the hottest this year. The top neighborhood was Bushrod in Oakland.

To rank these neighborhoods, the brokerage analyses millions of page views to redfin.com and homes favored by users are monitored for price and status change. The company also considers insights from Redfin real estate agents who specialize in neighborhoods across 39 major US metros. 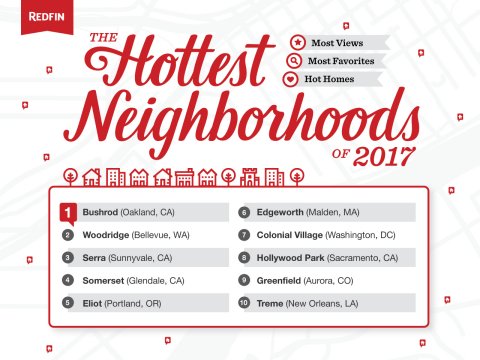 This year’s list is being driven by high-growth job centers with the top three hottest neighborhoods all situated close to Seattle and San Francisco. Although home prices are continuing to rise in these booming tech cities, home buyers are increasingly looking towards neighboring cities such as Sunnyvale, Bellevue, and Oakland. According to Redfin real estate agents, these communities offer homebuyers a better balance, with quick access to public transport, excellent shopping and dining options plus larger homes that are move-in ready combined with price tags that are a little easier to afford.

Redfin real estate agent Tom Henderson explains “Bushrod is a quaint enclave of homes with unique character nestled between the more established (and expensive) area of Rockridge and the increasingly trendy hotspot of Temescal. From Bushrod, you can walk to some of the Bay Area’s best restaurants on College Ave. it’s also walking distance to either the Ashby or Rockridge BART stations. Homebuyers often come to the area hoping to find something in Rockridge and ultimately realize they can have an even better lifestyle at a lower cost in Bushrod. This may not last for long, though - a two-bedroom starter home in this neighborhood recently sold for $200,000 over the list price and was off the market in 10 days.”

Other neighborhoods included in the list are in second-tier cities and include Eliot in Portland, Hollywood Park in Sacramento and Treme in New Orleans. Many of these neighborhoods have renovated homes preserving the nature and charm of the area while including updated amenities.

Redfin chief economist Nela Richardson said “Redfin research shows that over the past five years, home prices in urban cores have shot up 50% faster than in the metro areas as a whole. Our data on homebuyer activity shows that this year people are bypassing the most expensive areas in the center city in search for high-end amenities and renovated homes that are a few train or bus stops outside the city limits. The hottest neighborhoods of 2017 will be those edge communities that deliver urban convenience at prices that are closer to Earth.”