Redfin unveils its predictions for the housing market in 2017

With new technologies continuing to make headway into all aspects of the real estate transaction process, it’s likely that homes will spend less time on the market in the months and years to come according to Redfin.

Indeed, Redfin reckons that homes will literally “fly” off the market in 2017, with the average property selling faster than in any previous year. 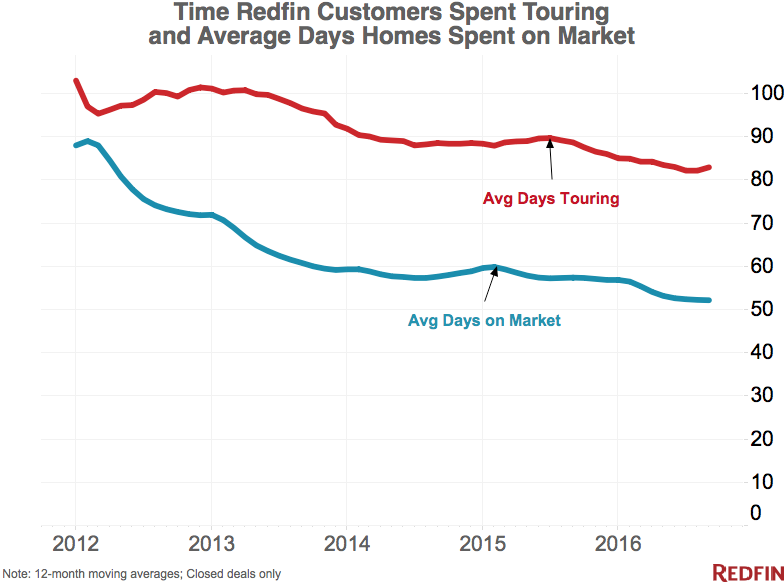 “We expect 2017 to break the 2016 record as the fastest market on record, measured by the average number of days homes spend on the market before going under contract,” said Redfin Chief Economist Nela Richardson. “This year, the typical home stayed on the market just 52 days, the shortest time recorded since Redfin began keeping track in 2009. Though buying a home generally takes longer than selling one, the trend is getting faster.”

Redfin’s report further states that customer behavior and technology will be a major driving force in the speeding up of the home buying and selling process.

In the report, Richardson said that the next generation of real estate technology will see a shift in innovation from online listings to hardware and real-world services that increase the efficiency of real estate transactions.

Given Redfin’s status as an online real estate brokerage, it’s not surprising that the company believes that the home-buying process will continue to move online, but it’s also worth considering that Redfin is likely in tune with the wants of younger buyers.

“More and more, there are buyers who are comfortable with an online offer process that makes it easier and faster to close a deal,” said Karen Krupsaw, senior vice president of real estate operations at Redfin.

In addition to forecasting that homes will move quickly off the market in 2017, Redfin also offered up six more housing predictions for next year.

Here’s a brief view of what Redfin expects to see in 2017:

1. The housing market will continue to grow, but at a slower pace due to affordability pressures

The percentage of homes in America’s largest cities that are affordable on a median income has declined the past four years and will continue to fall in 2017.

Given that nearly one in four construction workers is foreign-born, stricter immigration policies are likely to make the labor-shortage problem even worse, slowing new-construction growth to 6% in 2017 if these policy changes go into effect next year. This will most affect the availability of affordable starter homes, which means higher prices for first-time buyers.

3. Mortgage rates will increase, but not by much

Redfin expects the 30-year fixed mortgage rate to climb, but no higher than 4.3% in 2017. Wall Street’s optimism for economic growth and inflation in 2017 is expected to keep mortgage rates low.

Fannie Mae and Freddie Mac are increasing the size of loans they’ll back, while large financial institutions have introduced mortgages requiring as little as 1% to 3% down. The Trump Administration’s plans to privatize Fannie and Freddie likely won’t take effect until at least 2018.

5. Millennials will move to second-tier cities

Markets able to offer buyers new construction at affordable prices will take center stage in 2017, since many first-time homebuyers have been priced out of the starter-home market in more expensive metropolises. Redfin analysts expect cities like Raleigh, North Carolina, Austin, Texas, and North Port, Florida, which lead the country in the number of new residential building permits per 1,000 people, to lead this trend.

A 2016 Redfin study found that most people who had sold a home in the past year got a discount on the commission they paid to their broker, and so did almost half of buyers. Redfin projects that as a growing number of disruptive companies offer new, money-saving ways to buy and sell homes, even more consumers will save on real estate fees in 2017.