Real estate analyst firm Redfin has revealed that a staggering 2.7 million Americans faced eviction in 2015, and further claims that figure is likely a very conservative estimate of the true number of U.S. families evicted from their homes in the past year. 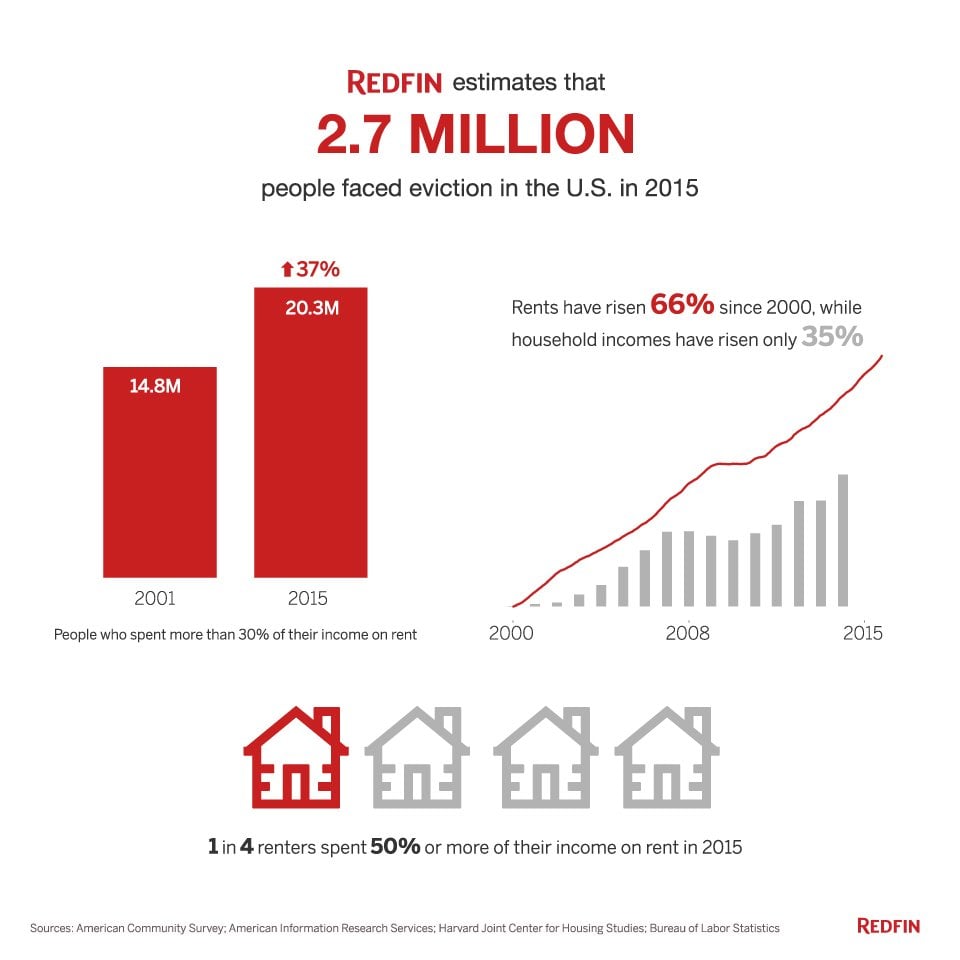 Redfin says the fact that so many families in the U.S. are facing or have faced eviction is symptomatic of a national affordability crisis that demands urgent attention. Redfin says the evidence suggests rents are out of control, families aren’t earning enough, and as a result they have to pay too much out of their wage checks to be able to make ends meet.

“Evictions are a silent threat to America’s cities. As alarming as Redfin’s finding on evictions is, it likely undercounts the true number of families forced out of their homes each year since many evictions happen outside the court system,” said Redfin chief economist Nela Richardson. “More families are renting than ever before, and roughly half of them are spending too much of their income on rent. Stagnant wages, a lack of affordable housing and escalating rents means that many families are living just a paycheck or two away from facing eviction, which can often lead to job loss or even homelessness. This is a national crisis that requires national attention.”

Redfin analyzed more than six million eviction records across 19 states where data was available provided by American Information Research Services, Inc. to predict the number of evictions for each U.S. county as well as the country at large. The analyst firm also examined the effects of rising home prices at neighborhood and metro levels on local eviction rates. Redfin found that neighborhoods with the highest median rent-to-income ratios had much higher eviction rates (evictions per renter household) than neighborhoods where residents spent less of their income on rent.

Redfin also revealed the 15 metro areas with the biggest increase in percentage of income spent on rent from 2011 to 2014. It found that those 15 metros saw a 3.8 percent increase in the number of evicted families from 2013 to 2014. This compares with a slight decline in the number of evicted families in other metro areas – suggesting a direct correlation between growing rental prices and evictions.

The worry is that this trend is accelerating. According to Redfin, there were 20 million renters in the U.S. in 2015, and more than half of these are “cost burdened” - which means they’re forced to spend at least 30 percent of their income on rent, up from 15 million in 2001. Redfin also notes that rents have increased by 66 percent since 2000, while incomes have only risen by 35 percent during the same period.

As far as solutions go, Redfin says that in some areas, especially the east and west coasts, more housing supply could make housing more affordable and ease the eviction rate. Other metro areas would need to see higher wage growth. A measure to ensure tenants being evicted have legal representation has proven successful at reducing the eviction rate in New York City, and other cities are looking to enact similar policies.