Fixer-uppers are back in vogue, with RealtyTrac reporting that 6.6 percent of all single family home and condo sales (numbering 43,740 sales in total) during Q1 of this year were flipped homes, a twenty percent increase from the last quarter and a three percent rise from one year ago.

RealtyTrac defines a home flip as any property that’s sold in an “arms-length sale” for the second time within any 12 month period. The data firm said that flipped home’s 6.6 percent share of the market was still some way below the 9.0 percent market share it had at the peak of the home flipping trend back in Q1 2006, but was nonetheless 55 percent more than the all-time low of Q3, 2014.

The statistics underline how home flipping has been gaining steam ever since that trough, said Daren Blomquist, senior vice president at RealtyTrac. He said the upward trend was due to lower interest rates and a “dearth of housing inventory” which meant flippers could better compete against regular sellers. However, there were a few words of warning from Blomquist.

Luckily for us then, Blomquist says that home flipping is not that far above historically normal levels, and said that flippers in most markets were behaving responsibly and rationally.

“In the first quarter, 71 percent homes flipped were purchased by the home flipper with cash — compared to only 37 percent who purchased with cash at the height of the flipping boom,” Blomquist continued. “Spending their own money rather than other people’s money is keeping flippers conservative. On average they are buying the homes they flip at a 27 percent discount below full market value and selling them at a 6 percent premium above full market value, helping to deliver strong flipping returns on average.” 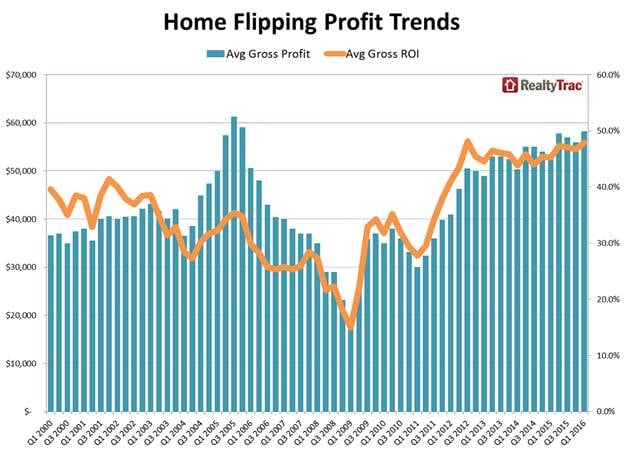 Matthew Gardner, chief economist at Windermere Real Estate, confessed to being somewhat surprised to see flipping on the increase in Seattle, considering home prices there are rising so rapidly. In Seattle, the share of flipped homes rose by 32 percent in Q1 compared to the previous quarter, up five percent from one year ago.

“My hope is that this is a temporary byproduct of having far more buyers than available inventory, as an increase in home flipping numbers can artificially inflate prices and makes homes even less affordable for buyers,” Gardner said. “Thankfully we are starting to see modest increases in the number of homes for sale in Seattle, which should cause a slowdown in price growth as we head into 2017.”

If anyone wants to understand why home flipping is on the rise, look no further than investor’s bottom lines. Home flippers are making bigger profits, with the average flipped home yielding a gross profit of $58,250. That’s the highest average gross profit since Q4, 2005, a more than ten-year high. According to RealtyTrac, that gross profit amounts to an average 47.8 percent return on investment, which is the highest ROI recorded since Q3, 2012.