I was reading Google News bits this morning when I ran across a story on the digital version of the Dallas Morning News about a legendary Texas luxury property business. According to the story by the paper's Real Estate Editor, Steve Brown, the well positioned Rosewood Property Company is on the move investing again. You knew about Rosewood, didn't you? Oh, you didn't. Then Read on. 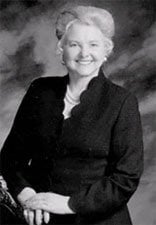 By way of a little background here, Caroline Rose Hunt (left courtesy Dallas United Way), the daughter of Texas oil legend H.L. Hunt, started the exquisite luxury brand Rosewood Hotels and Resorts some time back. She is, by all accounts, as close to American royalty and classiness as American's can get. And yes, filthy rich too. Her father was at the time of this death, the richest man in the world. The Hunt Brothers, her brothers, also had their share of fame and fortune, and ups and downs too.

All this is, however, great raw materials for another story, but since the opening of The Mansion on Turtle Creek back in 1979, Mrs. Hunt's Rosewood has been synonymous with luxury and excellence, at least with those familiar. Not the household name it could really be, Mrs. Hunt's enterprises latest emergence here, might well be the most interesting of all. America is, as you know, all but flat broke by some accounts.

Brown's story, at first, tweaked my sense of curiosity. Whenever I hear on the one hand of a company shooting for more brand awareness, and see something completely contravening on the other side of the equation, you see the rub here - Rosewood Property is not exactly Google on this channel, now is it? I am speaking of the relative obscurity of Rosewood Property outside the boundaries of the Lone Star State. Even within the boundaries if one considers news, social media, modern marketing at all, brand awareness for Mrs. Hunt's wonderful initiatives is... lacking. As I found out, this is an illusion.

But, looking at the pictures on the company's website, those do do Mrs. Hunt's company's sincere justice. If only the world knew more.

Here, another New York Times story about Mrs. Hunt here projects, at least for me, a tiny fragment of that time when we all thought anything was possible. Well dressed ladies, cigar smoking Texas oil men, the space race, an opulent Camelot reminiscence hits me when reading about Mrs. Hunt's endeavors, her habits not unlike so many ladies I spied from the stairwell, at dinner parties I was supposed to sleep through. Transported back to the now, I am sure when Mrs. Hunt hired Bill Flaherty three two years ago, it was not some cavalier decision. Why has the company waited to step into the branding arena til now? Maybe preparedness is as my old Scout Master used to profess, you always need this first. Then again, maybe the company is just too darned busy?

This whole "visibility" thing has set us one end, those of us imbued with a sense of self, a sense of digital superiority brought on by 100,000 hours or more of web machination. The fact is, there are some entities out there so immense and powerful, so caught up in the business of supporting employees and satisfying stockholders, they resemble more an oil derrick, one gushing crude so hard capping one instant can be daunting.

Rosewood has plenty of entrenched legacy going on, Flaherty's main task has probably been to build portfolio. Working backwards on a mini-company timeline since his involvement, we see.

The point I would make here is, one does not always see what is beneath each tiny news bit. Mrs. Hunt's businesses not only represent a sort of Rothschild like empire, but substantial philanthropic, community, and even political influence as well. From a new D/FW Airport development to fittings and engineering for some distant North Sea oil drilling rig, even to the table wines, special beef cattle, timber products, specialty services, and luxurious accommodation shown above, Rosewood makes me think about Rosebud from the famous Orson Welles film, for some reason. Of course Rosewood Hotels and Resorts was sold back in 2011, but the core principles Mrs. Hunt branded with the company originally, those still stand. You can see it in the services and products still produced.

Will Rosewood Property get a higher profile in the Dallas and other markets? You can take that to the bank. As for what Mrs. Hunt's legacy probably should be? Let me get on my soap box here. You see my friends, if there is one thing that can save the so called American Way, it is a big does of American money. More important than that though, an American aristocrat could probably do anything when compared to today's decision-less horde.

This is my hope anyway. I leave you with the ongoing legacy Mrs. Hunt started more than three decades ago. While her companies no longer own the Rosewood Hotels, icons like this famous Dallas landmark simply are always with us. And there is my tribute to some things I had somehow forgotten.