Seattle's tiny 'Up' house goes up for auction

A 600-square-foot Seattle home, overshadowed by towering retail buildings all around it, has been capturing nationwide headlines as this home – now known as the 'Up' house -- awaits its fate after Monday's auction. 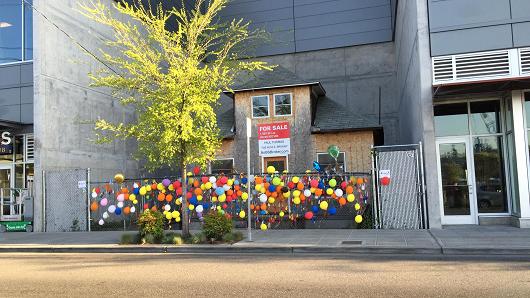 The tiny house has become a fixture in Seattle, sitting on a 1,900 square foot lot in the Ballard neighborhood that over the years is now towered by a five-story mall that went up all around it in 2006. The home is also surrounded by a UPS Store and Ross Department store that completely walls the home except for the front. The neighborhood is no longer zoned for residential properties, but this one last tiny house remains, reports CNBC News.

The home has become known as the "'Up' house" since its story strikes a resemblance to the 2009 Disney Pixar film, "Up," which an elderly man fights a construction project and ultimately uses colorful balloons to lift his house up. As such, tourists and residents now have added colorful balloons to the front gate of the home.

At that time, the home owner Edith Macefield refused to sell her home to developers, even as the walls came up around her home. Macefield passed away in 2008 and had no living family so she left the house ironically to Barry Martin, one of the construction workers who built the mall. Martin says the two developed a friendship over the years. He says that Macefield really just wanted to stay in the house and didn’t care about the mall towering above her home.

"I see that she had lived here for a major portion of her life, and she just wanted to die here," Martin says. "She didn't understand what the big fuss was when she was still alive.”

Macefield had wanted Martin to sell the home once she dies in order to pay the college tuition for his children. He ended up selling it for $310,000 to an investor group, Reach Returns, which was reportedly planning to put the home up on stilts. But the group defaulted on its loan and so that’s how the "Up" house has now ended up on the auction block in a closed bid auction. Deadline for offers ended on Monday.

"I wouldn't be surprised if it sold for a quarter million dollars or less, and I wouldn't be surprised if it sold for over a million because there are no comparables," says Paul Thomas, the real estate agent representing the sellers. "There is nothing I can look at anywhere in this country that's anything like this to give myself a wide range, so I don't have a clue." Thomas believes the home will likely be incorporated into the mall or will become a restaurant or office.

Nevertheless, while the home’s fate remains in question, Macefield has become some sort of icon in the town – becoming that image of a home owner who wouldn’t give up the fight for her home. A music festival has been named after her, as well as a drink at a nearby restaurant and even a tattoo that pays tribute to her, CNBC reports.