Building lots might be getting smaller, but they’re also being sold at more expensive prices, according to data from the U.S. Census Bureau’s latest Survey of Construction. 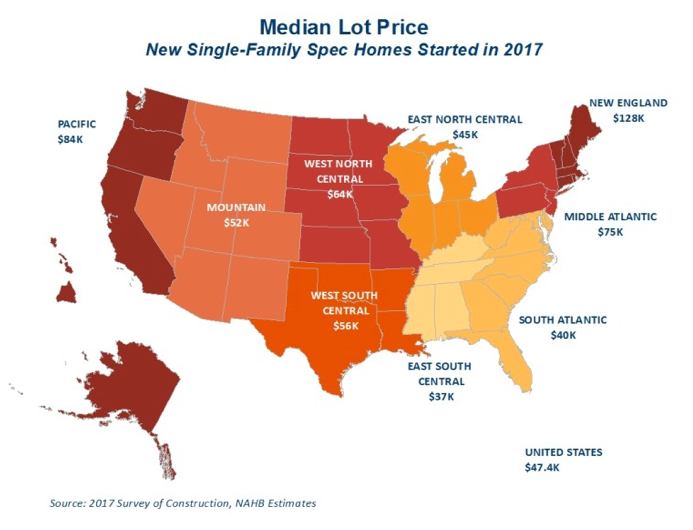 The data shows that the averageSingl price of single-family lots has now hit $47,400.

It’s a new record high for lot prices, though they remain cheaper than they were in the pre-recession days, when we adjust for inflation, the National Association of Home Builders said. During the early 2000s, lots prices were hovering around $43,000 each, which would be worth more than $50,000 when converted to 2017 values.

Still, there are some regions in the U.S. were lot prices have already surpassed their former peak, even when adjusted for inflation. The West South Central and West North Central regions have seen the most pronounced increase in lot prices, the NAHB said.

The West South Central division, which includes Texas, Oklahoma, Arkansas, and Louisiana, has traditionally had lot values that were lower than nationwide trends, but since 2015 its overtaken the national average. Now, more than half of lots in the region are selling for more than $56,000, which is well up from the glory days of the early 2000s, when lot prices in the area were priced around $30,000 or less.

Meanwhile the West North Central division, which includes Iowa, Minnesota, and North and South Dakota, is also seeing record lot prices. Half of its lots were priced at more than $64,000 in 2017.

“Given that the nation’s lots are getting smaller and home production is still significantly below the historically normal levels, it might seem surprising that lot values keep going up,” the NAHB notes on its blog, Eye On Housing. “However, the rising values are consistent with persistent record lot shortages. They are also consistent with significant and rising regulatory costs that ultimately increase development costs and boost lot values.”