The article in Propertywire shows that overall during last year, there were 63,807 residential sales recorded by the Land Registry.  This is an increase of 25.9% compared to 2013 and is the first time sales have rebounded since 2011 when cooling measures were initially introduced. The report was produced by international real estate firm Knight Frank and shows that sales of luxury properties costing in excess of HK$10 million rebounded by nearly 50% year-on-year, reaching a total of 7,778 sales for last year.

Apparently this trend looks set to continue well into this year, particularly as developers are launching new projects which include small to medium sized units. In order to address the housing shortage in Hong Kong, the government has pledged to increase the numbers of private homes to 19,000 units per year for the next ten years. In spite of this increase in the numbers of properties available, it is still anticipated that prices will rise by around 5% this year. 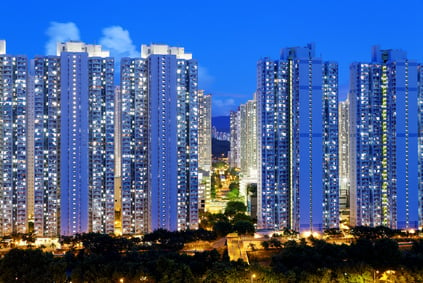 In addition, the threat of interest rate increases in the United States and the continuation of cooling measures by the government is expected to reduce price growth for luxury property.  It is expected that more landlords will put up apartments for lease rather than deciding to sell, and this will increase the supply of rental property which in turn will reduce luxury residential rental rates.

During December the office leasing market is generally quiet, and last year was no exception. Rents for Grade A offices remained stable and overall year-on-year were up 2% in the major business districts, and were up 5% on Hong Kong Island but fell by 6% in Kowloon. Office sales were down by 37% last year compared to 2013, but demand for larger office space increased towards the end of the year, a trend which is expected to continue into this year. This is due to increased demand from banks and insurance companies who wish to own offices in Hong Kong, as well as more demand from small to medium sized businesses looking to reduce their overall costs. It is expected that Grade A office rents in central business districts will remain good or will increase by up to 5% this year, due to sustained demand and a limited supply.