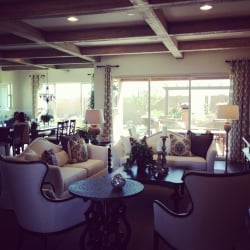 Taylor Morrison, a Scottsdale-based homebuilder has unveiled its first community in Phoenix’s prestigious Northeast Valley. The community consists of 67 home sites, all of which are at least a quarter of an acre in size, and all back up to natural space and Arizona Sonoran Desert washes.

The single level Summit Collection floor plans open to the public on Saturday, December 8 and range from 2691 ft.² to more than 3900 ft.², and will have up to five bedrooms, 3.5 baths,  and three and four car garages. Prices begin in the low $400,000’s. Taylor Morrison is also due to host a special evening grand opening on December 11 between 5 PM and 7 PM. This will feature food from Cave Creaks Amaro Pizzeria & Vino Lounge, and music from the guitarist David Robinson. It will include $2,000 worth of design studio coupons and a drawing for a bottle of Silver Oak Cellars wine.

Pierrette Tierney, Vice President of sales and marketing for Taylor Morrison’s Arizona division says "This is our first community in the Northeast Valley and it's certainly one of our most anticipated openings. The beauty of the surrounding desert, Summit Collection floor plans and the community’s close proximity to retail and shopping will make Lone Mountain a very special place to live."

Lone Mountain is a gated community anchored by a 10 acre park with playground and walking trails. Shopping and entertainment just a few minutes away from the community, with Desert Foothills Performing Arts Center and Cave Creek to the North, and Desert Ridge Marketplace and City North to the South.

Tierney went on to say “It’s a gorgeous community, providing picturesque landscape in one of the most sought after sub-markets in the Valley.”

Home-buyers will also be helping the Phoenix Children's Hospital if they purchase a Taylor Morrison at home this December, as the company is donating to its "Deck Your Halls” promotion. Home-buyers can also save up to 20% off popular options through the company's design center. Taylor Morrison will also donate 5% of all design center revenue during the two-month campaign to the Phoenix Children's Hospital.