The Confused Housing Market - Which Way Is Up?

Despite very low interest rates, home prices and the market are still mired down. Even the balance of news shows pretty clearly we may be stuck for some time in a recessive trend. That is unless we are spurred otherwise... For many, "any way is up" these days.

Reading about what is going on for the real estate market is a bit more than confusing these days, actually since the great recession hit half a decade ago. This week, the San Francisco Chronicle runs a press release proclaiming "Interest Rate Cuts Fail to Fuel Property Market",  and over at CNBC the strength of the bond market seems to dictate those same low interest rates may last all year, if not forever! While the trend in news is sharply toward rates coming up, you see the dilemma where grasping reality goes.

Even if the former report is so obviously aimed at snatching customers for "How to Buy and Sell Houses for a Dollar" (two links to this), Rick Otton's creative brand of real estate investment is not exactly aimed at Wall Street hedges.  As for the latter, that report seems like a mix of self love via internal links, mixed with some name dropping outside promotion of experts - at least for me.

You see, one can study the links and mentions in news and editorial when seeking the "true path" of matters. But that's fodder for another tale. You will note all along in this post images from the World Economic Forum's Facebook profile - interesting graphics that beg the question; "For what purpose?"

Whether you read papers such as the San Francisco Chronicle, with their press release distribution, or rely on the big brands like CNBC for your investment (buying) strategies, the economy is not the only thing that's confusing these days. For me I cannot decide which is worse, PRWeb and SFGate allowing shameless encyclopedia salesmen in the mainstream, or CNBC basically advertising for the TD Ameritrade conference (these internal links go deep, deep, deep), Shane Shepherd and Research Affiliates, or Jeremy Schwartz and WisdomTree. 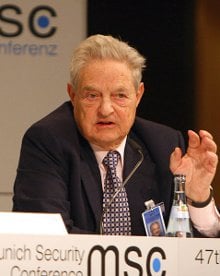 My point here is, just who do you trust? Whether or not any vested interest ideas and machinations are present at all, really is beside the point. A less than intuitive Forbes article here, does betray a little of the behind the scenes goings on; "Interest Rates, Equities And Bonds: Getting Ahead Of The Curve" suggests the painfully obvious - with everything affects the market. But, what author Michael Quinn does help with is a snapshot of George Soros(at left), one of the suspected prognosticators (if not full fledged instigators) of this and other economic meltdowns. To quote from the Forbes piece:

"...Soros developed a concept he calls reflexivity.   The idea is that financial markets (and to a larger extent the economy as a whole) do not operate fully independent of the actions and biases of the participants..."

Now if ever there were a truth in the telling, a market mover and shaker openly identifying manipulative mechanisms is it. Saying investor confidence is tied to investor confidence, there is no hidden brilliance in all this. The end result the sentient human takes away here is, "Our livelihoods are tied to great players in some cosmic game of Monopoly," add to this some "get rich quick" charlatans and BINGO! Watch this interview with Soros by CNBC's Maria Bartiromo.

Not only does Soros effectively drive a wedge in between Germany and the rest of the EU, he pretty much labels all those unemployed people in America (and elsewhere I guess) as "resources", rather than people. My father told me the world was going to hell in a hand-basket when businesses renamed personnel departments "human resource departments". You can also denote from the images I have used from the World Economic Forum, classifications and sub-classifications of people and countries, even currencies, is something such organizations always do - weighing those resources?

By the way, were you aware there are over a million people in France that are homeless? How about over a quarter of a million in Germany, five million in Russia, 4% of the UK population, or 2.5 million Americans? That's a lot of wasted resources.

It may interest the reader to know too, in 2008 Forbes listed George Soros as the 97th richest person in the world with a net worth of about $9 billion. Today George Soros is #22 on Forbes' list with an estimated $19 billion, a tidy boost during the worst world economic crash since the Great Depression.

You! The reader, potential home buyer or seller, REIT investor, or banker arrived at your pre-ordained destination - steady and holding economic mediocrity. Now we all await the decisions of Mr. and/or Mrs. BIG. Whatever you do though, try not to get taken to the cleaners while we wait for "Which Way Is Up".

Finally, "up" for the World Economic Forum team obviously takes a decidedly vertical approach. The image below show what this Swiss group thinks will change the world, a teamwork effort to climb in the Alps. The image above (and I place it there for symbolic reasons) is from The Homeless World Cup, an organization dedicated to helping homeless people raise themselves up via football and team work etc. And while the decision makers of the world partition us all up into neat little groups and states, there is really only one division, you know?