The Story of the Memphis Belle

The B-17 from WWII known as the Memphis Belle is renowned for being the first heavy bomber to complete it's 25 missions over war-torn Europe. That's despite being bullet-ridden, flak damaged, and on five separate occasions having engines shot out and once coming back with her tail nearly shot off. But to her credit she dropped more than 60 tons of bombs. 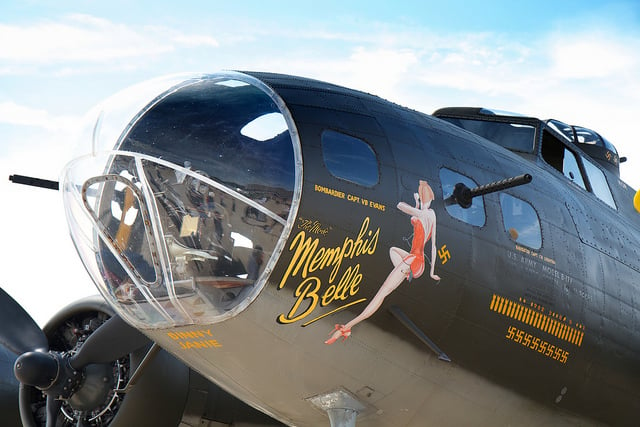 The war bird saw missions over France, Belgium, and Germany. Happily, she kept all of her crew alive. The Memphis Belle gets her name from the pilot's girlfriend Margaret Polk. After serving 25 missions, she was brought back to the U.S. where the plane and much of the crew went on a 31-city War Bonds tour. It's worth noting that during the first three months of America's combat flight missions over Europe, 80% of the aircraft were shot down because there were no escort fighters available.

Today, the original Memphis Belle is undergoing restoration. The original memphis Belle was found in Oklahoma in 1946 among hundreds of other B-17s about to be turned into scrap metal. When Memphis mayor Walter Chandler learned this, he bought it for the scrap value of $350.

However, six decades later, local groups were unable to raise the funds to make the original bird flight worthy again. After years of static display at various locations in Memphis, the original Memphis Belle was moved to the National Museum of the United States Air Force in October 2005. It is now undergoing what is hoped to be a full restoration. Unfortunately, original parts are very difficult to find.

Funding of the restoration includes $150,000 donated by the city of Memphis, $100,000 each from Boeing (the manufacturer) and Federal Express (headquartered in Memphis) and $576,000 from the American people after Hugh Downs of TV's 20/20 aired the need for more money.

Several other WWII era aircraft seen at many national air shows honor the Memphis Belle in name but are not the original. None are B-17s.

In case you're wondering what happened to the original crew of the Memphis Belle:

2 comments on “The Story of the Memphis Belle”