The total value of the U.S. housing market has hit $23.9 trillion, its highest value since the early 2000s, before the last recession hit home, the Urban Institute reports.

The organization says that when we break things down, household equity has risen to $13.7 trillion while total debt and mortgages has increased to $10.2 trillion.

The Urban Institute cites data from the Federal Reserve’s Flow of Funds report as its source, and previous updates have shown that the value of the U.S. housing market has been increasing thanks to growing household equity, since 2012.

Frank Nothaft, CoreLogic senior vice president and chief economist, said he expects to see home prices rise by around 5 percent more in 2017. The chart below shows that housing hasn’t been valued this high since 2004 to 2006, which was just before the market crashed:

However, it’s unlikely that the housing market will be worth much more next year, due to an expected decline in refinance applications. That’s actually happening right now, with the Mortgage Banker’s Association reporting that the refinance share of mortgage activity currently accounts for 57.2 percent of the total number of applications its received this year.

This year is estimated to finish with close to $2 trillion in origination volume, with slightly varying forecasts from different housing organizations. The chart below presents the different forecasts from Fannie Mae, Freddie Mac and the MBA: 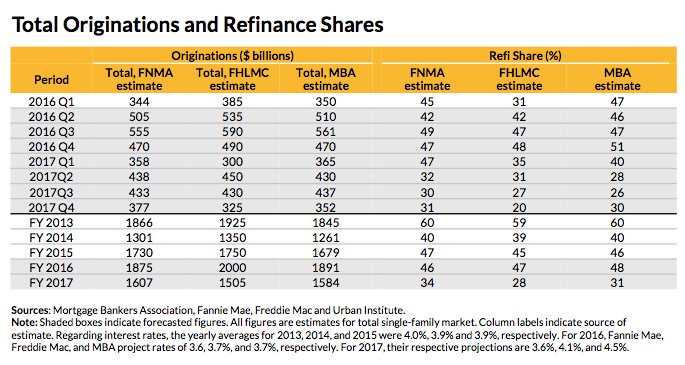 Although none of the organizations’ forecasts for 2016 aligned, all three are predicting mortgage originations in the $1.5 to $1.6 trillion range next year, due to a sharp decline in refinance activity that’s a likely consequence of rising interest rates.