When Toxic Assets Aren't the Only Toxic Element

In investing news, Westport Investment Group, a real estate acquisition and advisory firm, announced its positioning to acquire deep discounted U.S. bank assets. According to the firm's press release, they now stand poised to acquire toxic assets from U.S. financial institutions, and to assist in the recapitalization of selected banks. At least this is how the announcement reads. The press from this company reads like a major commercial investment move is being made, but is it?

Westport Investment Group LLC crafted a press release and submitted it via PRWeb, which in turn was picked up by any number of secondary news outlets online. The effect, at least ostensibly, is at best sensationalizing, and at worst  misleading. At least in my view, the "appearance" of a major interjection of capital, where no details or supportive evidence exists, is problematic. We were intent on reporting this financial news, that is until we dug a bit deeper.

This company has released a press release which suggests they intent to "bail out" banks with an infusion of capital via acquisition of so called "toxic" assets - or bad paper basically. But taking a look at the company's website (aside the fact it looks bad) there is little or no mention of this news or even the company's intent to "acquire" any property save distressed rental storage units. Of course there could be other types of properties Westport is focused on? Maybe their website has not been updated? If all they are involved in is Self Storage properties across the U.S., this hardly qualifies as a global initiative by a huge corporate machine to bail out US banks. But there is more.

There is little doubt that the FDIC has, and will continue to seize banks who cannot climb out of the Great Recession.  You may already be asking; "So why is Westport's announcement important even if it is irresponsible or misleading?" Companies which fail to disclose, are incompetent,  or even mislead investors and consumers are part of the problem instead of the solution. Trust in the system at this juncture is crucial. Westport's founders, Frank A. De Lucia Jr. and  Chad Thenyachoto, as well as their other partners, should know this.

Chief Financial Officer of Westport, Chad Thenyachoto, had this to say about the announcement:

“We are extremely pleased to enter into this strategic partnership. It comes at a perfect time, when more and more banks are facing a financial crunch as a result of ever increasing commercial loan defaults. Experts predict that these defaults are expected to continue through at least 2014, and in 2011 U.S. foreclosures are expected to increase by another 20%. Clearly, American banks are in need of a lot of help.”

That statement paints Thenyachoto as credible and his company as poised to infuse capital, does it not? Whether or not the company has the funds, or the "association" they claim; "...established a strategic relationship with a multinational Mergers and Acquisitions firm,"  is not supported at all. The reader will note in the press release that no multinational firm has been listed or identified. This is either incompetence, negligence, our of purpose, or somehow deemed proper by the unnamed institution(s). This is only logic.

A visit to Westport's pages linked from the release reveal their intended targets, the pages contain as many legal waivers and intentions as information about the company. Perhaps this due to De Lucia's position as a copyright attorney? It matter not. Just a cursory search for the principals at Westport turns up a digital footprint of questionable value for any company. Without casting unnecessary dispersion, let's just say seeing most of Westport's top executives quoted and pictured on this Robert G. Allen site is reason to wonder, he has had his share of trouble.

For those who do not know, Robert G. Allen is the somewhat controversial author and "get rich quick" guru associated with any number of initiatives stemming from his supposed expertise. He is the author of the best-selling books Nothing Down, Creating Wealth, and The Challenge. The reader should visit John T. Reed's website which scutinizes Allen and other so called real estate gurus.

As for DeLucia? His profile at the firm Fitzpatrick, Cella, Harper & Scinto is stellar (superb PDF), leaving this writer wondering what in the world he is doing associated with anything so apparently incomplete as Westport's digital dogma? But then there he is in shirtsleeves right alongside several others in testimonial for Allen? This could be some coincidence I suppose. Maybe the principals at Westport made so much money through associations with Allen products they naturally joined forces? This we cannot know without further research. But I invite DeLucia and any of the key Westport players to please explain all  this.

Just the association of key investment executives with Robert G. Allen does not prove any misconduct on the part of anyone at Westport. The point I am making should actually help Westport conduct their business more effectively, by adding some transparency and credibility to their initiatives. All I am point out is the "appearance" of inpropriety, which is often all it takes to condemn business to failure. If I can so easily question Westport, then? 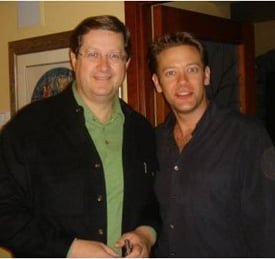 This short informative should be an example of how closely real estate professionals should adhere to several principles. Besides ultimate transparency, as we see is lacking here to a degree, this "digital footprint" term I so often use is crucial.

For Westport or any company the things that are reported or even marketed online actually never go away. The associations of individuals or companies reside in the indexed pages of Google and other search engines, even in cached form, for anyone with the knowhow to find. In the case of the questions I ask now, I assure you that finding information took only a cursory search.

As I mentioned above, we invite Westport to mail or comment on the questions we have raised, the most paramount being the company Westport affiliated with, and of course the relationship of Westport's principals when doing testimonials for various Allen products. Of course they are under no legal obligation to do so, but it seems clear the real estate industry may like to know. Listed below are the team members of Westport who are apparently seen giving testimonial (in italics) for Allen's Real Estate Rolodex.

Chad Thanyachoto, CFO - a student from Bangkok, Thailand, watched a SINGLE 62-minute training video of mine, put what he learned into action and in 4 days generated $13,400 in profits! Not bad for a guy who speaks English is a second language!

Brad Wozny, Senior Advisor (seen upper left with Robert Allen) - While Brad does not appear to have given testimonial as the others, he does have his own web initiative which lists some of his fellows at Westport as testimony givers too. You can find that here, and interestingly Chad Thanyachoto offers his testimonial for Wozny too. The video at the bottom of this article shows Thanyachoto endorsing Worzy at a conference. Note: In order to be completely fair to Wozny here, I did a bit of a "scam" search on his products and found what amounts to a very small complaint factor compared to many other "guru" type products.

By way of a short conclusion here, let me say that what I have presented here is by no means a complete rejection of what Westport Investment Group asserts, let alone categorical proof of anything. More precisely, my report is opinion based on my experience in PR and particulary Internet communication these last ten years. The intent is to help companies like Westport convey their business more effectively. In my opinion, their past endeavors do not shine favorably on future ones, nor does releasing news that could be considered misleading or at best incomplete.

I welcome their response and will of course update this report accordingly.

Disclosure: The opinions and views of Phil Butler are not necessarily those of RealtyBiznews or its parent company Media Collab.