U.S. now has more renters than at any point since 1965

A higher proportion of American households are renting their homes than at any time since 1965, according to a new report from the Pew Research Center based on Census Bureau data.

The report found that 36.6 percent of all American households now rent their home, the highest figure since 1965 when 37 percent were renters. Although the number of U.S. households grew by 7.6 million in the last decade, the number of homeowners remained flat while the proportion of renters grew by almost ten percent in the same period.

Some of the reasons for the increased number of renters include rising home prices, lingering fears over the last recession, and higher student debt.

"There is some evidence that increased student debt has made it more difficult for households headed by young adults to become homeowners," Richard Fry, a senior researcher at Pew and one of the report's authors, told CNBC.

That much is evident from the high percentage of millennials who said they’re currently renting their home. In 2016, some 65 percent of households headed by adults aged 35 and younger said they were renting, up 8 percent from 2006. Fry added that younger adults may be struggling to accumulate enough money for a down payment on a home. However, he admitted that many may prefer to rent rather than own, as owning a home makes it more difficult to move.

The report also revealed that owning a home tends to equate to long-term happiness. A recent Trulia survey found that biggest regret among the renters surveyed was that they wished they’d bought a home instead of renting, cited by 41 percent. 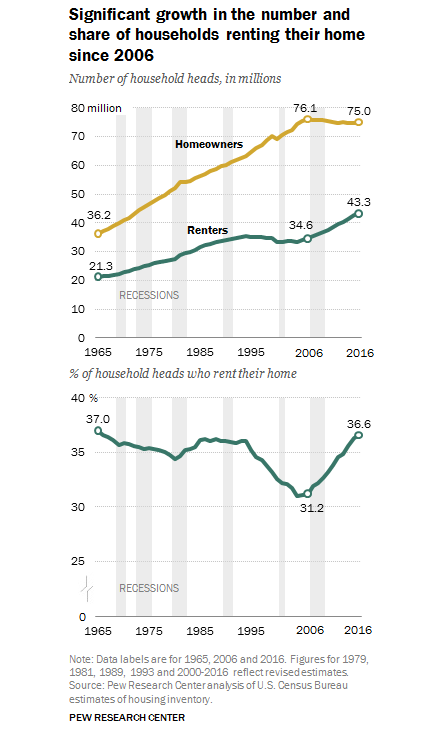 One reason for that regret is that renting has become decidedly more expensive in recent years, to the point that in many parts of the nation it’s now actually more affordable to buy a home and pay off the mortgage. That’s true even though median home prices in the U.S. recently surpassed $200,000 for the first time ever, according to data from Zillow.

David Weidner, managing director at Trulia, told CNBC that many consumers do not realize that mortgage costs become more affordable over the years as their incomes rise. “Down the road those costs will start to shrink as part of the overall home budget," Weidner said.

It remains to be seen if more households will become renters in the years ahead. The Pew survey found that almost three-quarters of renters (72 percent) indicated they would like to buy a home at some point.